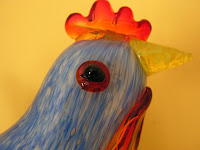 Some years ago I went to the Theater in the Square in Marietta to see the one-man performance of The Gospel of John in which the actor Brad Sherrill dramatically recited the entire Gospel by himself. If you saw the play, you know that certain seats in the front rows were designated by the actor to be the place where he would go when Jesus interacted with certain characters in the story.

I happened to be sitting in the seat where he would be encountering Philip. I didn’t know this when I sat down, but I was rather pleased at the beginning of the performance when the actor stopped in front of me and said, “Follow me.” I glowed with a bit of pride, as if Jesus had come to me himself.

It was a little less exciting when he stood in front of me sometime later and asked me, “How are we going to buy bread, so that these people may eat?” I suddenly felt put on the spot. Thank goodness he walked away to deliver my answer that six months’ wages would not buy enough bread to feed the 5,000.

Oh, I was convicted. It was as if Jesus himself stood in front of me, looking me in the eye and saying, Penny, have I been with you all this time and you still do not know me?

This part of the story in John, despite its many layers of history, theology, and symbolism, its layers of past, present and future, of words working on multiple levels, is still fairly simple. Jesus, the Word made flesh, came to dwell among us, moved into our neighborhood as Eugene Peterson says, became one of us, to show us God. But the incarnation had to end; if Jesus was truly human, he would die, and he did die.

And he knew he was going to die, and he was trying to explain this to his followers, the small group that was left. He was leaving, he was going back to God from whom he came, and they were staying behind. But he would send another Advocate (Jesus having been the first Advocate, the first to be sent to us by God) so that the disciples and then those who came after them could continue the work Jesus began.

And that’s what happened - Jesus died, God raised him from the dead, Jesus breathed the Spirit onto the disciples, and he ascended to the Father (at least that’s how it works in John). The incarnation was over, the Son returned to the Father, but the age of the Spirit had begun. The Spirit would help them know how to continue the work Jesus began and empower them to do it.

But if Jesus walked with them all this time and they still did not know him, which is a pretty universal message in all the Gospels, not just for John, then might that also be true for the Spirit? Has the Spirit been working in and around us all this time and yet we still have not known it?

In other words, life goes on, the world changes, we mature into people and lives that were unthinkable to us when we were younger. And the work of the Spirit will be ongoing forever as well. New things are going to come up. Things that the disciples could not imagine. Things that we cannot imagine. The world has changed and is going to change - as Cardinal Newman said, “to live is to change.”

We have to have the eyes to see the Spirit at work, though, just as Philip had to have the eyes to see God through Jesus. We have to allow the Spirit to teach us again and again. And so on Pentecost, we don’t just commemorate the gift of the Spirit in the past, we are not to be nostalgic for the time when the church began to come together in a burst of fire and ecstatic speech, but we are to ask ourselves, where do we see the work of the Spirit now? What is God doing in the world now - is God doing something now that people before would not have been able to bear? Is God doing a new thing? Is the Spirit showing us that there are new ways of knowing and seeing God and the things of God? Is the spirit showing us new ways of being community? Were there things that we could not bear before that the Spirit can teach us and interpret to us now? Has the Spirit been with us all this time and we did not know it?

It is understandable if we do not always recognize the work of the Spirit right away. A poet-friend and member of St Bartholomew’s, Kendall Lockerman, wrote a poem a couple of years ago about Pentecost, and in it he ventures that “Pentecost... is the day when the Holy Spirit came down to roost on the heads of the apostles and the Holy Spirit set their hair on fire. The apostles appeared to know from the very beginning that dealing with the Holy Spirit was going to be weird....The Holy Spirit is as weird now as she ever was. Rock on, that.”

Life accompanied by the Spirit is often unsettling. Jesus’ work itself was unsettling - eating with sinners and outcasts, touching women and lepers, doing unauthorized things on the Sabbath, preaching love and forgiveness, turning things upside down, relentlessly providing abundance through ridiculous amounts of wine and bread and fish. First century weirdness, that.

The Spirit empowers us to continue Jesus’ work - what benefit to the world is the incarnation if when it was over, the work was finished? Only part of the work was finished, the part that only Jesus could do. For if the work was finished, then there would have been no need for him to send the Spirit to interpret and empower. Jesus’ work was about showing the world what God is like, who God is, and what God means for the world to be like. The Spirit comes among us to remind us about the abundance of life in God - the wine at Cana, the loaves and fishes upon the mountain, the raising of the dead at Bethany, the forgiveness of the woman taken in adultery, the breakfast on the beach at which Peter is redeemed and we are all given to understand that Jesus needs us to feed his sheep and tend his lambs. Those things are not over.

And so Pentecost is not just about rejoicing that the gift of the Spirit was given in the first place but also about rejoicing that the work goes on, understanding that it is up to us now to recognize and celebrate the Spirit at work and to ourselves continue the work that Jesus began. Work that was unsettling and weird and upset the establishment and was costly to everyone engaged in it as it will be for us as well.

But it was and is work for healing, work about abundance, work to make love known - to be love - in a world that is hurting and degraded and lonely and hungry.

That work does go on and it can be just as unsettling now as it was back then. It might look weird. It might be costly. It might be something we could not have borne before or think we cannot bear now. We may not always recognize it even when we are in the midst of it.