A Sermon for Easter 7C 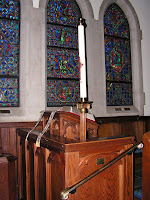 The scene in Phillipi is quite exciting, isn’t it? Unlike the previous events in Acts, this story is told as an eyewitness report - “WE came with Paul and Silas to Phillipi, a Roman colony.” And as a Roman colony, meaning it was founded by Roman soldiers, there is a well-organized government complete with plenty of laws and customs. People are coming and going in the marketplace, there in the center of town, engaged in all sorts of business, from the dyed cloth trade of Lydia to the fortune-telling trade of the slave girl and her masters. This is a thriving Roman hotspot.

Paul and Silas and the rest of the gang are like tourists in any foreign capital, staying for a few days in this vibrant European city, going about looking at all there is to see in a Roman colony outside Palestine, and spending time in the marketplace.

Of course we know that wherever Paul goes, trouble soon ensues, and so it does here. Paul becomes annoyed that this fortune-telling girl keeps telling everyone that these men are slaves of the Most High God, who proclaim to all a way of salvation. Which is odd, really, because of course this is true. Paul often describes himself in his letters as a slave, a prisoner of God, and the Gospel Paul proclaims is in fact the way of salvation. She is telling the truth, she has divined correctly. Various scholars have tried to explain Paul’s peevishness away, but there it is. She annoyed him, and finally he had enough and called the spirit of divination out of her.

And then, off we go. Paul’s action causes an uproar in the city. The slave girl may have been freed, but now she has no way to make money, and her masters are more than annoyed. They are incensed.

They seize Paul and Silas and drag them into the marketplace, hauling them before the judges to accuse them of disturbing the peace of the city by bringing their Middle Eastern Jewish customs into this Roman European culture. This event has been a symbolic battle of the gods as well - for Apollo was the patron of divinization - and Paul, in the name of the Most High God, defeats Apollo in this exchange. According to the slave owners, these Jewish foreigners are outside agitators, to use a phrase often employed here in the South back in the 1960’s, and the crowd responded to the rabble rousing as rabble will, joining in the attack on the Jewish foreigners who dare to come in and try to shake things up, to do things that will have social and economic consequences, that will change the established culture. How dare they?!

So, the judges, without any deliberation, order Paul and Silas to be flogged and thrown into jail and locked into the stocks in the innermost cell.

And then there is another uproar - during the night, while Paul and Silas were praying and singing hymns in the jail, perhaps witnessing in some way to the other residents of the prison, a violent earthquake shakes everything so much that the prison door bursts open and the chains fall off of all the prisoners.

The jailer, who wakes during the violent earthquake realizes his honor will have been lost if his prisoners have escaped under his watch, and he prepares to throw himself upon his sword, but Paul calls out to him that all is well, they have not run away. Because this is a story about the Gospel, not an adventure tale with a daring escape scene.

And so the trembling jailer throws himself at the feet of Paul and Silas and says, “What must I do to be saved?”

I really resonate with the jailer. He’s just a guy trying to do his job, and he is in the crossfire, between two great but opposing powers - the power of the city magistrates on one side and the power of a violent apparently God-caused earthquake on the other. His question is absolutely understandable. In the face of all these shows of power over which I have absolutely no control but which I am clearly at the mercy of,

where is my sanctuary? Where is my shelter in the midst of all this upheaval?

And the answer? Believe. Believe the story, believe the witness we bring. Believe that God wants you to be saved.

But of course the jailer does more than just believe - he binds up the wounds of Paul and Silas - remember they were flogged - he washes their wounds, and he feeds them in his own home. Not so that he can deserve salvation, but in response to the wonderful, nearly unbelievable proclamation of the Gospel: Believe that God wants you to be saved.

Others of us may believe that somehow we ourselves will come up on the right side of the column but that other people won’t. And some us us have our own lists of people we just know God wants to punish. Or at least we know that we want God to punish.

And frankly, the mostly secular world out there thinks that this is what Christianity is about. They see the church fighting over who is in and who is out, who is worthy and who is not worthy, and they get the message loud and clear that being Christian has got something to do with purity and exclusion and punishment.

But what does Jesus say?

The Gospel reading today allows us the rare privilege of overhearing Jesus at prayer. In previous verses, Jesus has prayed for his disciples and now he goes on to pray for us, too - those who will believe because of the witness of the Gospel, meaning us. Jesus prays for us.

And that life in God is shown through love. Jesus came into the world to show God’s love, to BE God’s love in the world, and after Jesus is gone, after he has ascended to the Father as he said he would, the disciples - and by extension we - will be the love in the world that Jesus showed us how to be. Jesus does not pray that we will be pure or that we will be worthy. Jesus does not petition God to punish people. Jesus did not come to set up a system of privilege and exclusion.

The Gentile, Roman jailer showed that love to Paul and Silas - those Jews from Palestine, those who were considered outside agitators by the local leaders, those who were jailed without a hearing, those foreigners who were both influencing the economic system and messing with cultural practices. The jailer showed love by opening his heart to them, by washing their wounds, and by feeding them in his own home.

We live in exciting times and places, too. Sometimes too exciting. There’s much in the news that reminds us that we too are powerless in the face of earthquakes and volcanoes, oil gushing from the floor of the Gulf of Mexico, bombings and attempted bombings at home and abroad, plane crashes, and tragic attacks on children in China.

And the answer is love.

List to what South African Archbishop Desmond Tutu said on the radio program “Speaking of Faith” last month: He said, “There’s no question about the reality of evil, of injustice, of suffering, but... at the center of this existence is a heart beating with love. You and I and all of us are incredible; we are remarkable things. We are, as a matter of fact, made for goodness.”

And then act accordingly. Befriend and stand up for the stranger. Bind up people’s wounds. Feed them. Be love.