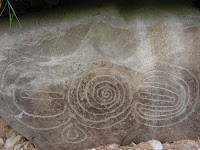 This is a stone at Newgrange, the neolithic passage tomb complex in County Meath, Ireland. The carvings on this stone may seem to be simply decorative to us, but the symbols here surely had meaning for those who carved it and those who saw it. The people who carved these stones for this obviously important and meaningful site were not just "doodling" on rocks. Just as Egyptian tombs are covered in stories and messages about the dead person and his accomplishments and his expectations about the afterlife, so these stones must have conveyed something, even though we don't know what the carvings mean now.
Images of every type send out messages; the fact that we may not know what the message is does not diminish the power of the message for those who understood it. But it can be difficult for those who do not connect with the symbol to understand that power for those who do. One thinks about the debate over the Confederate flag, for example; that flag was a powerful symbol for people on both sides of the debate and yet the argument championed by many was that the flag ought to be considered more objectively, still a symbol, but a symbol emptied of its emotional meaning and reconstructed as an object of historical interest.
Then there is the issue of the cross erected in the Mojave National Park, in which the Supreme Court ruled that the cross should not be considered only a symbol of Christianity because it is also an object often used to mark or honor those who commit heroic acts that honor and build up our country. In other words, Justice Kennedy opined that the cross has been emptied of its symbolic explicitly Christian content and made into something more generic.
Symbols convey powerful messages that speak to us on multiple levels. We scrutinize images we see (often in this day and age this means photographs) and draw conclusions based on how we interpret the symbols. Who is the person, what is the person wearing, where are they, what's in the background, what are they promoting, who arranged the whole thing to begin with? We are constantly sending out messages by our demeanor, our dress, the people we associate with. Remember when Princess Diana touched a person infected with HIV/AIDS? That was a symbolic act; we were to see it and interpret that we ought to overcome our superstitions about that disease.
So it was with Jesus. Who did not own a home, who went about not only in his own Jewish country but also into Gentile territory (this when/in a place where the world was either Jew or Gentile), who hung out with the little people and touched women and lepers.
Sometimes we don't seem to realize how powerful symbols are. We argue against that power in public debate; we resort to "rational discourse" so as to be taken seriously. And while it is intellectually stimulating to uncover symbols and trace histories and to see how symbols are being used in different situations (often, sadly, to manipulate), the fact remains that we react to symbols not with our intellects but with our guts and in our hearts. It may make absolute rational sense to sell the old homeplace but at least someone in the family will be devastated at the loss of what symbolized something (ideal childhood, family, innocence, source of memories, whatever) to them and may well fight long and hard to do whatever it takes to preserve the place. A flower pressed in a book may have meaning to only one person; another may find it and throw it away without a second thought (the first thought being, ugh, a ratty dried up something). But that flower sent a powerful message to someone. The sight of that flower opened up an entire world to the person who could read the message even if it was a mystery or even simply a nothing to anyone else.
Email Post
Labels: Ireland Mystery