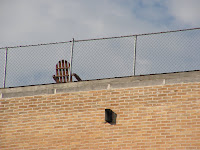 I just finished a fantastic read - Tom Coyne's "A Course Called Ireland," which is an account of Mr Coyne's adventure of walking around the entire coast of Ireland playing all the links golf courses that dot that coast. He not only walked the golf courses but all the land in between as well, sometimes for two or three days between courses! He walked 1000 miles in four months and played 54 courses - nine hundred and some holes. The book is not exactly "about golf," nor is it a travelogue, or a memoir. It is a very personal account of someone who wanted to have a great adventure, who lived to tell the tale, and wrote some things about it.
Someone who reviewed the book on Amazon suggested that this book belongs in the category of "vicarious literature." That is, books that let us experience something of the experience of the writer that has further been sweetened with his subsequent reflections about it.
In a way, this is a form of the modern day hero story. We need people to admire - people to look up to, people who have the guts to drop out of the everyday world and do something really special. Our modern day heroes are nothing like the ones from the olden days. But they are still heroes - they still have attempted and often prevailed in courses most of us would not believe we could do.

Tom Coyne dropped out of his "regular life" for four months to live in something of an alternative universe... yes, he was in Ireland playing golf, which many Americans do, but he was doing more than playing golf (and drinking beer). He was purposefully opting out of the prevailing culture (one particularly built around the automobile), to focus on something else, something primal - walking the earth. And for another, he was trying to connect the dots between the wisps of information he had about his distant Irish ancestors, Ireland itself, his personal history of golf (with his father and his own pursuits) and his life. It's a fascinating study and a fun read.
That reviewer was on to something about "vicarious literature." Through all kinds of books and National Geographic and TV specials and DVDs like Planet Earth, we can sit in our living rooms and marvel at the world. We can book tours into many parts of the planet formerly inaccessible to all but the most intrepid of explorers. We can have something like an experience without having exactly the experience. We can experience someone else experiencing a place, a life.
This is what TV, books, and movies give us anyway. How many people read The Perfect Storm, watched the Pride and Prejudice miniseries, read Moby Dick in order to go and live somewhere else for awhile, to become liberated from the constraints of every day life? This is one of the great American pastimes, the mainstay and fodder of book clubs and movie nights all over the country.
I often wonder, though, if we could disconnect from the prevailing culture more easily than we think. In truth, the Christian life is supposed to be countercultural, but we have trouble connecting the everyday culture with our faith life, believing them to be separated and put into boxes that don't touch. We don't necessarily connect liberating ourselves from our cars, or fast food or the huge grocery chain, or the soccer league, or whatever our daily grind may be with living a life of faith.
But so many of us read these books and watch these shows with a real hunger to do something special, to do something that isn't just going with the flow. Tom Coyne marvels that after he has walked hundreds of miles around the coast of Ireland, someone still would tell him that ought to call a cab because he couldn't possibly walk twenty minutes to get to the movie theater. The tone of the paragraph he wrote about that was palpable. That someone simply didn't have a clue about what was real in life.
That's what so many of us are looking for, something real. Something that doesn't get covered up by the daily grind, the expectations and shoulds and musts and the way everybody does things, whether or not they even want to.
I don't think one has to walk across Ireland to get to that realness, but I understand it's easier in a way to do the grand adventure than it is to live life differently every day at home in our own communities.
Email Post
Labels: Books counterculture risk-taking