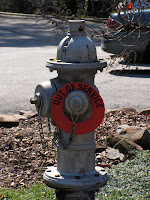 Don't you hate it when you think you've found what you need only to discover that it doesn't work? It's not the answer to your problem, it doesn't satisfy your need? You've got a whole scenario going, and then reality sets in. The replacement part you bought doesn't fit. The shoes don't actually match the dress. The person you thought would be able to help you is suffering from burnout and they either make things worse or just aren't available to you.

There is currently a national conversation going on about clergy burnout, based on a couple of articles that have appeared in the New York Times recently. (See here and here.) Clergy themselves talk about this issue and go to seminars that may have a unit on self-care; clergy wellness programs (as referenced in the first Times article) are gaining in popularity. The work I am about to embark on is covering for someone who is taking time out to rest and renew and refresh - a sabbatical, to use the Biblical word for it.

Burnout is not unique to clergy. Lots of people burn out. Teachers, therapists, coaches, lawyers, doctors, volunteers, parents. These generally are people who are very giving folks who for one reason or another run out of gas. Some people burn out very quickly, due to a lethal combination of factors that may include high expectations, poor boundaries, conflict, a misguided desire to be everything for everyone, lone wolfishness, and many others that I'll bet you can think of yourself. For others it comes like an accretion, slowly building up until one day it's all just too much.

I've been privy to some interesting conversations about burnout. There are those who will blame the burnoutee completely. He didn't take care of himself; she was naive about how much time it would take, it's all his or her fault. There are those who think that there is no such thing as burnout, that in their opinion, people don't work hard enough. And I've also heard burnout talked about as some kind of moral failing - he must not have been cut out for this kind of work, she wasn't really very dedicated. They should have had more regard for themselves or they should have had more regard for others. And then, as the second article suggests, there's the belief that people burn out because they are constantly under pressure to sell out and please people instead of following their calling - that burnout can be caused by the congregation itself.

What I usually end up wondering in these conversations is why people (including myself) end up getting so heated up over defending their opinion about burnout. We are invested in our opinions about it big time. I know enough psychology to recognize that sometimes the things we get the most worked up about are things that push our buttons, that hit closest to home. I got into a warm (I won't say heated) exchange with a colleague once who quoted a well-known male theologian whose prescription was that when we're feeling burned out we should go out and help other people. I nearly lost my temper, because I knew that the well-known male theologian has a wife who is dedicated to HIS career and an income and career as a writer that afforded him ample support and time away. What about those single mothers out there? What about man who doesn't have a spouse dedicated to supporting his vocation because she has their own?

Now let me say that my family is supportive of my vocation. So that's not why I was testy. I wondered if it was a gender thing - that women are always told to go out and help other people and not take care of their own needs. But then some men chimed in and said they felt the same way I did. We all agreed to disagree about the subject of burnout and move on to other topics.

As evidenced by the two NYT articles, this is a complicated issue. The fact that the whole story doesn't fit into a sound byte doesn't mean it is incomprehensible, but it is complicated. There are many factors on all sides and some of them have to do with personality, both individual and corporate, history, circumstances, and "fashion." The second article notes that people are consumers in all arenas now, including choosing a church - they are looking for the church to offer them the best service. This is a current fashion. If it's good for choosing a school or a bank, then it should be good for choosing a church.

Everyone loses, though, when people get burned out. The burnee, for sure, but also the people entrusted to the burnee's care. How it happens may be debatable, but the result seems clear, and it's that God's people get hurt.
Email Post
Labels: healing priesthood The Church

Toni McLean said…
Ah Penelope,
You touch on so many things that are important or relevant to me. I have experienced workplace burnout and I also experienced the approach that the burnee is the problem. It is obviously far easier to blame the burnee than to change the workplace culture that failed to keep a goo eye on its workers and allowed the burnout to happen. A 'good' workplace will salve its conscience by shuffling the burnee off to receive whatever kind of therapeutic attention s/he needs. Out of sight out of mind and we don't have to do the really hard thing - change!

I now talk to not for profit organisations in particular about staff burnout and its dire consequences for the individual, the service recipients and the organisation itself. Occasionally they actually implode if enough of their staff are burning out and it can get very nasty.

I hope your 'locum' doesn't mean burnout for you.

Penelopepiscopal said…
Bless you, Toni, for working with nonprofits on this issue! I am hoping that things like the NYT articles and other more public conversations will underscore the work you and others do to raise awareness about it. And no, I'm not in a burnout place myself, thanks be to God.
Penny
August 10, 2010 at 9:07 PM