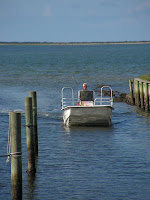 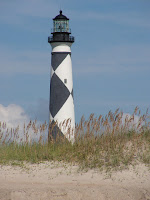 Today my son and I drove over to Harker’s Island and caught a ferry (i.e., a flat motorboat that seats about twelve people) over to Cape Lookout. The ferry leaves from the backyard of the ferryman’s house, which backs up to the sound - one turns into his driveway, parks behind the house, buys a ticket in the garage, and hops on the boat that’s parked in a little slip behind the cars. The ferryman has a great job, assuming he likes living on the sound and driving his boat back and forth to the Shackleford Banks and Cape Lookout all day, going along beside dolphins and pelicans and herons, steering the boat between the shifting sandbars, pulling up alongside the wild horses that walk the beaches of the Shackleford Banks (and sometime swim), greeting all the other boat captains and ferrymen by name. He pulls up to the beaches or docks and helps the people get out of the boat and then back in again, people who are really excited about seeing the things he sees every day - the water, the sky, the lighthouse, the animals, the big boats with the pirate flags, the small fishing boats and colorful sailboats. He gets to do this every day and make money on it. My son pointed out the black Corvette parked in the yard, supposing it being the ferryman’s streetside ride.

Our boat out contained two parties, my son and I, and a group that appeared to be made up of a married couple, their daughter and son, and either the husband or wife’s mother and her sister. They were headed over to the Shackleford Banks, where wild horses and lots of birds roam. (The horses are apparently descendants of Spanish Arabians that swam ashore after a 17th century shipwreck, or perhaps they came with Sir Walter Raleigh’s English explorers.)

The ferryman zoomed across the bumpy sound, the wind blowing our hair all around, sometimes making dramatic turns to get us through the sandbars upon which pelicans stood (looking as if they were walking on the water) and then drove us in close to some of the horses grazing on the Banks and pointed out the ones ambling along the beach. Then he drove up to the beach near one end of the Banks and let the other family off, promising to pick them back up at the same spot a couple of hours later.

Then he steered the boat with the two of us left aboard back out into the sound and across to the beach on the other island, the lower end of the Core Banks where the Cape Lookout Lighthouse stands along with a few buildings maintained by the National Park Service. The lighthouse flashes every 15 seconds, day in and day out; it’s shorter than Hatteras and a lot larger than Ocracoke and instead of stripes it features a black and white diamond pattern. Back before the GPS, sailors used the lighthouses not only to keep away from the dangerous shoals but also to note where they were. Thus, each lighthouse has a distinctive day mark (the pattern on the outside of the lighthouse) as well as a distinctive light pattern/sequence.

First, we stopped in the small Lighthouse Keeper’s House Museum. Given that we have visited all but one of the North Carolina lighthouses (we’ve seen the Oak Island Light as we went by on a boat but didn’t visit the light itself), we know a lot about the histories. But it’s always neat to see whatever NPS movie is playing, and this one was both informative and very beautifully filmed. We learned that the outer banks of North Carolina were just sandbars when Columbus sailed the ocean blue, so had he made it to the NC coast, he wouldn’t have even seen them. The barrier islands are slowly moving towards to mainland (remember how the Hatteras Light had to be moved a few years back because the Atlantic side of the beach had eroded while the sound sides were building up?). The Cape Lookout National Seashore seems to be safer and more stable than the other islands, though, apparently because they are uninhabited.

Then we walked across the boardwalk to the Atlantic side of the island and walked down to the actual cape itself, a thick triangle of sand at the end of the island that trickles out into the Atlantic for fifteen miles or so. All along the beach, huge whelks and helmet shells wash ashore right at one’s feet. The Park Service allows each visitor to take away two gallons of shells, so we picked up a couple, only to trade those up for larger or more beautiful shells all along the way. I found one rather large Scotch Bonnet (the state shell), and we saw many clams, scallops and other bivalves, and a few large helmet shells, but the number of huge whelks is amazing.

It was beautiful walking along a nearly deserted shore (once we left the boardwalk area, we only passed eight or ten people in an hour and a half of walking) with the sea oats waving atop the dunes and the diamond patterned black and white light house rising from behind the golden dunes. The ocean was a beautiful blue and the shore was filled with piping plovers and sandpipers feeding furiously as they ran along in front of us. Then the whole flock would rise up into the air and fly across the water to land behind us where they could hunt coquina and sand fleas at a more leisurely pace.

We actually had to rush to get back to the ferry on time (we should have given ourselves an additional hour, something to remember next time). We managed to get there before him, and we waited at the dock until we saw him coming toward us, smiling.