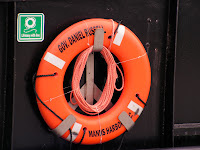 The other day I stopped at a local fast food joint, one that is located on one of our more colorful neighborhood streets - the strip, really. One never knows who might be in there - street people, kids from the local high school, pillars of one neighborhood or another that borders on the strip. The locale and the restaurants along that street are a kind of stomping grounds for a crazy-quilt community of folks from various races, ethnicities, and classes who may or may not be mentally stable, live in homes, or be able-bodied.

I use the word community deliberately. The other day when I stopped in, I noticed a man walking by my car on the way inside ahead of me. He wore clean clothes and his white sneakers were very clean, too; his socks were pulled up all the way and his shirt was buttoned up all the way, too. There was something about his face and his gait and the way he talked that suggested he had some kind of mental impairment. He and the woman who took his order had a lively conversation about other people in the neighborhood (who had been in that day, particularly) intertwined with the food ordering part.

While he was waiting for his order, another man came in and got in line. This man appeared to be homeless; he wore dirty, torn clothing and his appearance (in stark contrast to the first man) was decidedly disheveled. He was of a different race but he, too, had features suggesting some kind of impairment. During his food ordering process, he and the order-taker/cashier had a discussion about how much food he could get for the $3 and some change that he had balled up in his hand.

I tried to be invisible so I could continue to linger and hear their conversation because I was touched at what I was witnessing - people reaching out to one another, to give encouragement and comfort and support, participating in community with such honesty. But I didn't want to gawk and when my order came up, I took it and headed out.

But all the way home, I thought about the little scene in the fast-food joint. Would that we could all be so understanding and pro-active about the needs of others for human interaction, for compassion, for understanding, for dignity. The scene I witnessed was not the kind of scene I would be likely to come across at the bank over on the "nicer" end of the neighborhood where people had community waiting for them elsewhere - at home or at work or at school. The people at the fast food place were acutely aware of their own needs and the needs of others for human touch and voice and compassion and interaction, the need to eat and the need to feel they have a place in the world, a place where they have companions along their way.