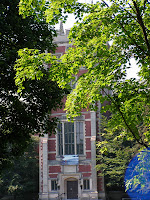 In my community, the children went back to school today. The neighborhood seems quieter this morning, as mothers (and some fathers, too) rejoice that regular schedules have returned and for some the house is now empty for a few hours. Soon enough, those schedules may become oppressive and life will be too hectic and demanding, but on that first day, everything looks fresh and new and all -parents, teachers and kids - have a sense of anticipation. What will this year be like? Will there be new friends, how will the new teachers/students be, shall I take up a new activity? Old friends will be rediscovered; growth and maturity and new hairstyles will be noticed. Notebooks are not yet torn nor pages lost, backpacks do not yet hold stinky uneaten lunch leavings from three weeks ago. Someone will get a much needed clean slate/new start, thanks be to God.
When I was young, school didn't start this early, even in the South, and we attended only half-days for some weeks in order to accommodate the families who needed their children to help bring in the tobacco crop, which was the mainstay of our local economy. Those children might otherwise not show up until some weeks into the school year and some might never catch up, and so a compromise was in order. Our county was one of the biggest producers of brightleaf (cigarette) tobacco in the country; the local tobacco market where farmers brought their barn-cured bundles of golden, fragrant tobacco leaves brought money - in some cases the whole yearly income - and jobs to many: the auctioneers, the tobacco company representatives, and a host of others. The money was spent at the grocery store and the drug store and the department store and the movie theater and the hardware store and the feed and seed. And there were many banks in our town, where the money was deposited, from where money was loaned and expected to be paid back, all of it tied to those fragrant golden leaves.
During the summer the work had been to pick the suckers (the beginnings of flowers) off the plants to make sure the energy stayed in the leaves and didn't go into the flowers; during the fall, the leaves were ready to be harvested. They were picked by anyone old enough to do the work, men, women and children, although someone was always in charge of cooking the big dinner (at noon) in the house and bringing water to the people in the fields or running messages back and forth. The pickers picked the leaves and threw them onto a sled that was hitched up to a mule (wheeled wagons got bogged down in the soft soil) as it slowly moved down between the rows. The leaves were then tied into bundles and hung upside down in the barns to cure. This was all done by hand when I was a school-aged child.
My family didn't raise tobacco, or if we had a field or two it was rented out to tenants. (I think we may have done that for a brief time.) I liked everything about starting a new school year. Although I enjoyed my summers, I was always ready to be back among the throng, ready for the new books to read and subjects to encounter and the after-school activities. I especially liked getting new clothes for the new school year. New, unscuffed, shoes and whatever was the style of schoolgirl clothing that year. For a couple of seasons it was Pappagallo shoes and Villager skirts and tops (with the ladybug stick pin). Then miniskirts and fringe jackets, followed by tie-dye t-shirts and bell bottoms. Shoes ranged from saddle oxfords to Converse sneakers. It was a shock to me when I stopped growing so fast and could wear something for more than a year. Sometimes this was good, sometimes not; but I sure missed the major and annual back-to-school shopping spree.
The first day of school is to me, much more so than January 1st, the time for a new beginning - a rather glorious one, too.
It seems appropriate, then, to say that I too am beginning something new soon. Not only in my family life, with my mother relocating here in the next week or so, but in my life as a priest. After my month of vacation (August), I am beginning a new stint, filling in for the rector of a small parish about 30 miles away while he takes a three-month sabbatical. My work will be temporary and very part-time but I will be in the same place every week, unlike the last several months which found me in a different parish each Sunday. I will be able to do the pastoral work of a priest in a congregation as well as the sacramental work I have been doing but now within one community. I'll be doing Bible study and adult education and visiting and listening and singing and praying and just being with the same people, accompanying them on their journey for a short season.
I am excited about this new beginning and am looking forward to new relationships and new possibilities and new physical surroundings. Also, I probably should check my closet. I might need new shoes.
Email Post
Labels: parish work priesthood Reminiscence Reminiscense school

stpatti said…
Lovely, Penny. I recall Villager & Lady Bug, Capezio Skimmers & Weejuns. I kind of miss that simplicity. I always liked the rythm of the school year.
August 9, 2010 at 9:45 PM

Toni McLean said…
Hi Penelope,
I could comment on so much of what you have written but I will limit it to telling you about my childhood experience of book 'sniffing' - quite harmless compared with glue and petrol (gas) sniffing! As the new school year approached, end of January for us in Oz, I was always so excited about the new school year and what new things I would learn that I used to pester my mum til she got the textbook list from the school and then went out and bought the books (the schools supply them these days). I would pore over them and deeply inhale the new book smell which would generate a kind of 'intellectual' high - oh, I just realised, perhaps it was the bookbinding glue after all! :-)

When I tell my teenage stepson, whose not remotely interested in school, about this, he has a look of complete befuddled amusement on his face, like I'm some benign alien from another planet he's just discovered under his bed!

Toni McLean said…
Oops, sorry about the typo. "who's" not "whose" re my teenage stepson.

The nuns will be turning in their graves at that one!

Penelopepiscopal said…
Patti - I never could find Weejuns that fit well, but I had several pairs of of Capezio skimmers!

Toni - LOL about the glue. But he'll probably tell the story to someone else some day.