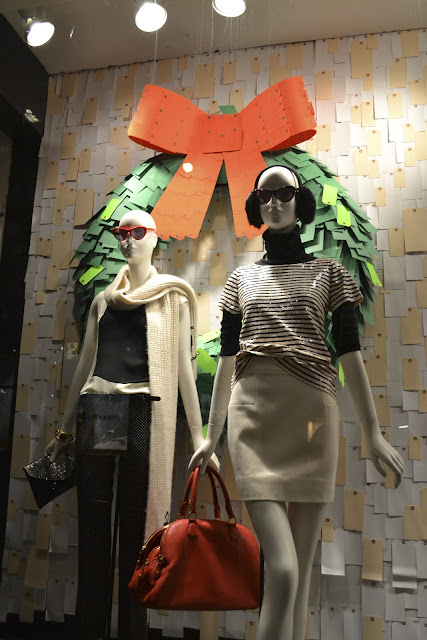 I took this photo in a store window in Rockefeller Center the other week when I was in Manhattan.  As you will see, if you look closely at the photo, the background and wreath behind the mannequins are made of tags.

Now, it's the season of Advent in the church. A time of quiet reflection and preparation for the coming of the Lord.  We are not doing Christmas yet, and we are not about consumption and frantic activity and the like.

It is not Advent in Rockefeller Center. Or in the mall. Or at restaurants. Or in any of the places that make the bulk of their income for the year during the "holiday shopping season," which lasts a varying amount of time, depending on where you are.  In the tourist town where I live, Christmas stuff goes up in the shops in August or September, whenever people are expected to be in town. The whole town is decorated by the first Sunday in December, which is a huge day for visitors. The merchants want to remind people that buying something from them to give as a Christmas gift is a great idea!

Lately, I've heard some good conversation about the whole "Advent police" thing - that is, church people scolding everybody who enjoys "Christmas during Advent" (or even before).

These days, I'm kind of "whatever."

Merchants make most of their money during the last quarter of the year. They count on Christmas sales to make it into the black column with their finances.  Why should this surprise us? Not just the big conglomerates but the Mom and Pop stores, too. They need a big holiday season of sales to make a living. So do the clerks and stock people and buyers - many of them our neighbors - who work at these stores. Shall we denigrate people who are making their living this way?

But the church is different. The season of Advent at church is not all mixed up with everyone's livelihood.  The church is countercultural. (And again, that's kind of the point. The world is doing Christmas in October, but we are different. Same as it ever was, to quote David Byrne.)

Still, that doesn't mean we should scold our parishioners for putting up their Christmas trees and wearing their holiday sweaters to church. (Jim Naughton put it thus at his essay at The Episcopal Cafe:  Your people don't need you to tell them that "You're ruining Advent!")  Jesus was able to take on the Pharisees about their practices, but frankly, we aren't Jesus and most of us almost always just come off like shrill killjoys when we think we are imitating him.

But it does mean that we model something else in our services and in our lives, as much as we can. I'm not suggesting we join the other side here. But maybe we're not in your face about Advent. We offer some quiet time, an alternative to the busy world out there. We don't overschedule ourselves or our staff or our parishioners. We sing Advent hymns and preach Advent sermons about preparation for the Incarnation. We build in some down time for reflection and spiritual preparation.

Frankly, that's pretty hard. The season out there in the real world that all of us live in every day is so busy and there are many opportunities for mission and outreach and wreath making and singing that we can overschedule while sincerely trying to observe Advent. And it is admittedly hard sometimes not to cringe at people showing up for church in Santa hats. But. We don't have to be so dour and finger-wagging about the whole thing. Surely there are ways to get the Advent message across with gentleness and love. If people see us happy and calm, maybe they will want that for themselves. If they see us scolding and scowling, they may well run away screaming.

So let's all give one another a break. Let's do observe Advent, but let's not be the Advent Police. Let's lead by example and not by simply scolding complaining ("You're ruining Advent!"). Life is short. Life is hard. Love people. So what if they "like" puppies on Facebook instead of signing up for silent retreats.

Ray Barnes said…
Excellent Penny, as ever. I love your last paragraph, it says it all.
By the way I've just resigned my commission in the Advent Police. Reward please.
December 3, 2012 at 2:45 PM

Penelopepiscopal said…
Thanks, Ray. I'm glad you're giving up police work. Virtue is its own reward, someone said. But I always think a little chocolate is helpful, too.
December 3, 2012 at 4:44 PM

Jay Croft said…
My own peeve is not with the "pre-Christmas" hoopla. We live in Alabama, deep in Baptist territory. Can't fight 'em. We bought our Christmas tree last Saturday, even before Advent began. It's sitting outside in a bucket of water, and we'll bring it inside closer to Christmas Day.

My peeve is with churches trying to outdo each other during Lent and especially Holy Week. Many try to cram in as many services as possible until one is utterly exhausted and by Easter morn, is just too "worn out."

And then many clergy take the next seven days off. "Thanks for coming, visitors. I won't be around next week, when the readings are very important to understanding the Resurrection but I'm just too tired."

The days in Easter Week should be times for a bit of evangelism, especially when a visitor leaves a card or other expression of interest. But oooh, that might be construed as Evangelism!
December 4, 2012 at 5:36 AM

Penelopepiscopal said…
Well, Jay, I can see that you are peeved. My own experience is that churches that offer additional services during Lent are doing so to offer opportunities for parishioners to live into what we exhort during the season - self-examination, communal prayer, contemplation. Clergy who try to do everything alone are bound to become exhausted; my suggestion is to ask for help from retired clergy or others who can assist with the load. The clergy are not the only people who are supposed to be evangelists - we all are.
December 4, 2012 at 2:24 PM

Jay Croft said…
Your suggestion about the use of retired clergy is spot-on. So many retired clergy are asked only when Cardinal Rector goes on vacation or "study leave."

It's my conviction that the Easter Season is under-utilized. Such glorious readings, especially those from Acts! What wonderful opportunities!

And some still call the second Sunday in Easter "Low Sunday." I've even seen it called that in church newsletters--a sure turn-off to a visitor who wants to learn more.

I would think that the Easter season would be the most appropriate time for an inquirer's discussion group!
December 4, 2012 at 3:18 PM

Georges said…
Is the Church really countercultural? Tertullian and other "puritans" of his time fought against Christmas itself. But the Church introduced Christmas (or rather the threefold Theophany) as a reply to the pagan feasts. People had the festivals in their "blood". So, the Church kept that, but turning it ("coverting" it) towards Christ.

What about Advent? People have got the "Advent fever". Why should we wait till the 4th Sunday before Xmas? Why shouldn't we begin the Advent on the 6th Sunday before Xmas, as our ancestors did prior to Charlemagne (and as they still do it in Milano, Toledo, and some Eastern Churches)? In that case, the Xmas shop decorations of mid-November would fit in greatly, and people (or, at least, Christians) could focus more on Church Advent than commecial pre-Xmas.
December 5, 2012 at 5:55 AM

Penelopepiscopal said…
Thanks for adding to the discussion, Georges. I think as the church becomes less relevant in the lives of people (as it seems to be, according to many), then perhaps it becomes more countercultural. Advent and Christmas in the church may overlap on the calendar with the secular shopping season, but in the church those seasons are infused with meaning well beyond what one finds in the market square. And only a few are really tuned in to that. So yes, I'd say that we are countercultural, not by shunning Christmas (a la Tertullian et al) but by approaching it with wonder and awe, not of snowflakes and flying reindeer but in wonder and awe that God wishes to live among us in our broken world and to bind up our wounds and to show us that power, violence, and death are not the answer. Does the church always promote that wonder and awe? Of course not. It is as flawed an institution as any. As it was in the Middle Ages and any other age. Living in the world and dealing with what is really happening in the world is always a challenge.

Interestingly, in the U.S., since we have Thanksgiving during the six weeks before Christmas, which is not a church holiday and yet like those other festivals, we don't want to stick up our noses at a holiday about giving thanks for what we have and so we have brought that into the church, too, it would be hard to move Advent back to to the 7th Century parameters.

At any rate, our history as a church has given us many models, and the challenge, as I said, is ever before us when we try to live in the world but not be of it.