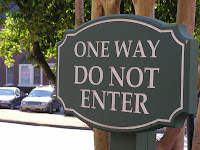 Sometimes one is just going along and suddenly one hits a roadblock. The way ahead, which seemed clear not long ago, now seems to be closing or already closed. There may be others who are on the road - you can see them! - going ahead or going the other way, but the sign in front of you says, "one way do not enter."

One thinks of Wile E. Coyote. He never gives up. He's creative. He is tirelessly optimistic. He is singleminded. He does not ever become defeated. Of course, he also gets blown up a lot and he falls with a big splat from great heights to the bottom of canyons only to get flattened even flatter by the rock or ledge or whatever that follows him down. And yet, in the next frame, he's back, maybe a little beaten and blackened and frazzled and missing some fur, but he's back nonetheless.
Is this tireless optimism or stupidity? Is Wile E. cunning or an idiot? Does he display focused drive, singleminded persistence and tenacity, or does he just never learn that he will never catch the Roadrunner?
And further, do cynical people sneer at optimistic idealists? Is it better to have low standards so that one will never be disappointed?
My grandfather used to say (and maybe yours did, too) that it takes all kinds to make the world go 'round. We need idealists and we need "realists." We need poets and number crunchers. The world needs folks who wish to push forward into new places and folks who remind us to be cautious. We need tradition and we need innovation.
So I don't want to be too quick to suggest that there is only one way to be in the world. There is a time to turn around and go home when the roadblock appears and there is a time when what is called for is strapping on some rocket-powered skates. A time to hunker down and a time to risk looking stupid. There's also a time to risk failure, and there is even a time to risk missing out on a chance to do something bold. One has to be able to ask "which time is it now?" and to discern the answer.
One's reaction to a roadblock often has to do with temperament. Some people are risk-takers and some people are risk-averse. Some people react almost without thinking to a challenge to their freedom (the "you're not the boss of me" reaction). It also has to do with life stage. Some people mellow with age and some people become emboldened.
And then there's the reality that one's own internal view of the situation is what is truly under one's control even if the external situation is not. One can choose to see a roadblock as a hostile act; one can choose to see a roadblock as an act of nature (whether human or corporate or environmental); one can choose to focus on one's response rather than the block. One can even choose to see oneself as capable of taking a risk even while not normally being much of a risk-taker. Myself, I sometimes have to choose to see myself as capable of walking away instead of putting on the skates and realizing that not everyone needs to do the big bold thing every time. There may actually be a time to risk letting an opportunity slip by. And then to choose not to second-guess myself over it.
Email Post
Labels: aging growth risk-taking temperament the journey