Bringing in the Sheaves 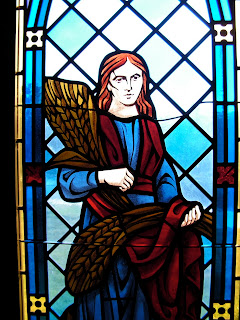 This might come from a movie or TV show.  Some of us were talking about Andy Griffith yesterday and the guy Otis who was often in the Mayberry jail due to having had a few nips too many from the flask (in fact, the keys were on the wall so Otis could just let himself in when he needed to) might have sung the song then.  Maybe the folks at the Mayberry church sang it, because sometimes I associate the song with Aunt Bee, too.

But at any rate, it is a harvest song, and this is the harvest time, these days around Thanksgiving when we are grateful and thankful for the beauty and bounty of the earth, so the song got in my head today.  We will come rejoicing, bringing in the sheaves.

Today is also the day known as Black Friday - the biggest shopping day in the universe, the day that all the retailers hope that their red ink will turn to black as a result of a buying frenzy (I hope you were not out at 4 a.m. buying televisions and whatnot) and they will end the year on the plus side of the ledger instead of the minus.

It is hard to keep one's head and heart in the right place when we are bombarded with messages about consumption.  What are squash and corn compared to 52" televisions and cute boots?  I love a bargain, too.  I want the economy to pick up, too.  But I know that the harvest is not about those things but about God's abundance and how in the end we will have all we need, fed by God's own hand.  I need to remember the difference.

masweet said…
"Bringing in the Sheaves" was one of the songs my mother requested be sung at her funeral. Not sure why, but we made sure Matt had all the words - she wanted all the verses sung.

Penelopepiscopal said…
Mary, the song must have bittersweet memories for you, then.

Padre, after sheets and sheeps, sheaves does leave something lacking. I think I'd stick with sheeps. I wish I didn't identify the song so much with Otis the Mayberry town drunk....
November 26, 2010 at 1:48 PM