A sermon for the beginning of Advent 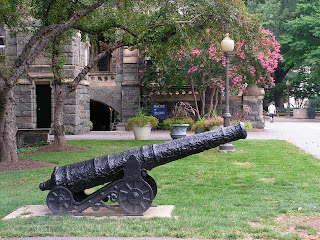 Can you imagine how many farming tools there would be in the world if all the weapons, the tanks and guns and bombs, were so converted?  Can you imagine people actually doing that?

The prophet Isaiah imagines that.  Isaiah who is no blithe Pollyanna, no stranger to the horrors of war, of the extreme destruction that ruins the land and snuffs out the lives of people and leaves the landscape desolate and unproductive.  Isaiah has envisioned all of that destruction and spelled it out dramatically and quite graphically in many chapters and verses to all who would hear.

But Isaiah also sees the world as God would have it, where, as he will say elsewhere, the lion will lie down with the lamb and will eat grass like the ox and a little child will lead them.  He sees the world as God would have it - as a world of peace, a place where all of God's people - all people - strive enthusiastically to learn God's ways.  Isaiah has envisioned God's terrified people streaming into the woods and caves and holes in the ground to get away from horrible destruction and now he lyrically describes them streaming eagerly toward God in great throngs.

Those who read Jesus' words in Matthew today and imagine it to be the beginning of what will be some kind of bloodbath haven't read Isaiah.   The vision Isaiah has of the time when all things are made right is not about some kind of holy war, about tribulation, about intrigue, about gangs of insiders taking out the bad guys.  No.  It's about peace and about all of God's people being fed both physically and spiritually - being made whole, having what they need.  About a time when no one is hungry either for food or for dignity, no one is dying, no one is being shoved aside by the powerful, no one is being killed and maimed and no children are suffering abuse or starving.

Most of the end-timers search for signs of impending doom, the day of wrath, the day when the Lord will return in fury.  Why is it so hard to imagine the Day of the Lord as a day of incredible, beautiful, life-giving peace in which the Lord's glory reflects God's desire for us to have the life that is really life instead of fury that looks like bloody death?  Especially when we celebrate a Lord who came to us as a precious child born to an unwed teen-aged mother, sleeping in a hay rack?   Is not bloody fury rather in the realm of Herod as he slaughters the innocents in the wake of God's breathtaking generosity in coming to live among us?  Why would we assign that kind of murderous intent to God who became human so that we might become divine?

How does one prepare then, during Advent, for something so unbelievably incredibly wonderful and sublime as God coming to live among us, as sublime as the notion of peace and peacefulness reigning so that all, not just the rich, might have life abundant?  We frankly can't even imagine such abundance for more than a few minutes before the vision disintegrates and disappears into the broken chaos that is our world?    How does one prepare for such a sublime thing amid flashing lights and Frosty the Snowman and Santa hats and the constant ca-ching of the cash registers?  How do we prepare for such a thing as magnificent as the transformation of tanks into baskets of food amid the din of people yelling that they are being persecuted because retailers don't say Merry Christmas as they entice them to shop and spend and buy and ring up sales as if honoring Jesus is about going into debt for the sake of new electronic games for the kids?  As if we should be buying chocolate Jesus bars instead of chocolate Santas and reindeer?

Because Christmas is on the calendar.  It happens at a definite time.  But God's coming to us, well that's another story.  Jesus says, nobody knows when this is going to happen.  Nobody knows when God will come to us, not even Jesus.  So this puts things into a different perspective.  It makes it seem as if that time when God comes will be never, or at least so far away as to not happen in our lifetime.  And how would anybody really be able to prepare for that?  We might even say, if we were pressed, why would anybody want to?  It seems like futility, fantasy, living in la-la land, being fixated on that which lives only in the distant past or the distant future.  What has that to do with us and how we live our lives now?  Isaiah's vision seems ridiculous and unreal.

But I think we are wrong simply to imagine ourselves in the middle plaec between the beginning and the end, in some kind of religious no-man's land, where nothing is really happening in terms of God's coming to us.  If Jesus came long ago, and will come again far in the future to transform the world into something radically different than it is now, is there just nothing doing in the meantime?  What does God have to do with us - and what do we have to do with God - if we are just part of a great vast middle time in between? So that Jesus is just a memory and the glory of God transforming the world into the New Heaven and New Earth is millenia away - as is the vision of tanks and bombs turning into instruments of peace providing food for all?

The way I see it, God comes to us often during this middle time in between.  But God is hard to see.  It is hard to see God's work because it looks like something else.  Jesus looked like a little Jewish baby born to a teenaged mother in the modern equivalent of a back alley.  God's angels who visited Abraham and Sarah to announce the impending birth of their son Isaac looked like three guys on a road trip.   God's covenant with all of the earth, not only the people but the animals as well, looked like a rainbow.

And so I think that during this Advent time, this time when we prepare our hearts to make room for both Jesus the baby and Jesus the king of glory, what that really means is that we need to prepare our eyes to see what God is doing in the world.  We need to prepare our eyes to recognize God's work beneath the commonplace.  To see a covenant within the rainbow, to see the hope of the world in a feeding trough.  We need to prepare our eyes to be able to see those swords that have already been beaten into plowshares.  We learn to sharpen our vision so that we can see God at work in the world here and now and say, look!  This is what I think God is doing here.  This is how I think God has come to me, this is what I think God has transformed in my life.  Here is my experience of God at work in me, in my family, in our world.   We need to develop the eyes to see the new things God is doing in the world so that we can be part of that new thing, too.

So, if we are to focus on how and when God comes to us in our own world and in our own time, we must be awake, as Jesus warns us.  We must be alert.  Watchful.  We need to remember that the coming of God to us is always surprising, always unexpected, to be found in places one would not normally look.  We must train our eyes to see and our hearts to wonder and our minds to allow for new things, unimaginable things, things as huge as tanks morphing into trees full of ripe fruit, things as tiny as a babe in arms.  To see love, to imagine peace, to look for and experience God's goodness in the face of the world's debilitating, pervasive, corrosive fear-mongering that is the stuff of Herod, not Jesus.

And then to show it to others.  To show that love, to tell of our experience, to speak about our own longings and imaginings that include the wellbeing of people in the face of a world that wants to demonize, castigate, and exclude.

Let us walk in the light now, let us stream to the mountain now, let us envision dignity and inclusion now, let us speak against fear-mongering now, let us look for God now, let us take hold of Isaiah's vision and make it our own in the face of hopelessness and cynicism now, not waiting for pie in the sky by and by because we are the people to carry hope into the world.  The makers of chocolate santas and electronic gadgets are not going to do it.  The political war machines are not going to do it.  Because they are not looking for Jesus to come among us.  But we are.    We are the ones looking for God to come among us to bring wholeness and love and sweet, sweet peace.