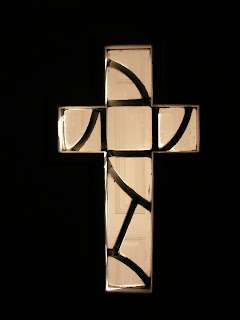 Thanks to Netflix, today at home I watched the Norwegian film Troubled Water (2008, by Erik Poppe), which won a number of indie-film type awards.  This is the third of a trilogy by Poppe, and although the films all have different stories (and I haven't seen either of the other two), they all apparently hinge on the themes of forgiveness and atonement.

At the heart of Troubled Water (you can read the info about it, along with a review, here) is the death of a young boy, for which an older teen is sent to prison, although he denies the murder and insists the child's death was an accident.  The teen, now a man, serves out his time and is released and obtains a job as an organist at an Oslo church and begins to build a new life for himself, a life that includes the church's pastor and her young son.  Yet he is obviously still haunted by the young boy's death.

Halfway through the movie, the perspective switches and the same time frame is now shown through the eyes of the dead boy's mother, who happens to bring a school group to the church and recognizes the organist as the one convicted of killing her son.  She had built a new life for herself as well, adopting two children with her husband.  But she unravels as we watch the story unfold again, this time from her perspective.  And of course, the two finally cross paths for an intense extended climatic scene.

One of the most interesting scenes, to me, was a very short one in which the mother confronts a man who works at the church, wondering (that's much too mild a word to use for how she asked him) why the church would hire someone who was a convicted murderer.  The man responds calmly that if one cannot get a second chance at a church, where can they?  But you can tell that she doesn't believe that he should have a second chance; she is convinced that he is a menace, and her feelings run so high that she shoves the man down.  This same man told the young man that the woman had come to see him, and that it would be good if he could talk with her so that forgiveness could be given.  But the young man insisted that he was not guilty and therefore did not need forgiveness.  He, too, was angry at the man.

Forgiveness and atonement are hardly new subjects for movies or books (Ian McEwan's novel Atonement, which was also made into a very good movie is one of my favorites).  They're really hard to get your head around.  We get very technical about forgiveness:  I won't forgive you unless you apologize.  Or, I don't need to apologize because I am not guilty and also I don't need forgiveness.  We get really defensive about it.

I remember once in a Bible study we were talking about forgiveness, how it works or doesn't work in people's lives, and someone said rather irritably that if God made us the way we are, then why do we have to apologize for being sinful creatures?  Why do we have to ask forgiveness about being human?  I decided then that asking for forgiveness is not about God, it's about us.   We are the ones who need forgiveness, and getting all technical about it is way beside the point.  We need forgiveness because many of not most of us feel guilty because we are always falling short.

And we need to forgive others as well, because if we do not, we become poisoned by our holding on to hatred and anger and disappointment.  God doesn't need our apologies; we need to confess our guilt and our sin and our anger and our disappointment and even our deepest secrets so we can let them go and keep them from killing us.

And of course, there's atonement.  Can a criminal atone?  If someone serves out a sentence, have they paid their debt to society?  The law says so, but people usually do not say so.  Once someone has been branded a criminal, many people don't consider their having served out a sentence as the end of it.  When they get out, the label stays with them, debt repaid or no.  The woman in the movie did not believe that the young man should be able to start over, to get a second chance.  Not even at a church.

What we never see in this movie is how the characters did manage to move on.  I had hoped we would (because I'm really interested in how one might tell that story), but that didn't take away from the power of the movie as it stands.  It was a fascinating story, well told and well acted, showing us yet again how difficult, and how powerful, forgiveness is in the life of a human being.

balloons said…
Your blog is really excellent. It inspires the readers who has that great desire to lead a better and happier life. Thanks for sharing this information and hope to read more from you.
November 30, 2010 at 5:21 AM

Anonymous said…
Just this past week an amazing book which has been seven years in the making was just released. The name of the book is UNBROKEN by Laura Hillenbrand. I had read DEVIL AT MY HEELS in 2005 which is a biography of Louie Zamperini and used that book as an example of forgiveness for my middle school Sunday School class at St. Simon's. Mr. Zamperini was a Japanese POW in WWII and was severely traumatized by his experiences. At his wife's urging, he attended one of Billy Graham's crusades and completely turned his life around. In 1950, he flew to Japan and met with as many of his captors that he could find and FORGAVE them. His story is amazing and I always try to share his message with anyone that will listen. Kay Guest
November 30, 2010 at 10:19 AM