Still Life in the Ocean 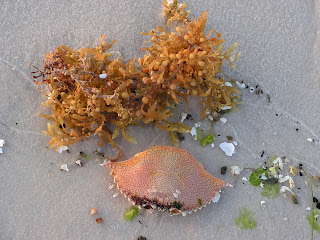 This photograph is called:  Still Life with Empty Crabshell and Sargassum.

Sargassum is a type of seaweed that is distinctive in that certain of its species are never attached to the seafloor at any point in its lifecycle.  Sargassum floats, often in big mats, in the open ocean, and the Sargasso Sea, that deep blue, clear elliptical section of the Atlantic that is bounded by the Gulf Stream on the west and north but no land anywhere.  Bermuda is in the northern part; the West Indies are to the south.    Sargassum is important to tuna and other large fish, sea turtles, dolphins, and also many smaller fish.  It sometimes is so thick and dense that it creates something like floating islands in the ocean, providing food, shelter, and shade to all sorts of marine life.

But it isn't tethered to anything.  It just floats along on top of the ocean, along with its community.

For a long time, I think I affirmatively wished to be like that, untethered.  Perhaps because in many ways, I was untethered for many years.  I moved around, I was not closely knit within my family, I didn't really develop a career.  I kept my connections loose.  Looking back, I'm not sure if I was this way because I wanted to be this way or if I was this way and so I thought it a positive.  Either way, I often still think of myself as transient, even though I've now lived in the same house for more than twenty years, married to the same man, now with children.

And yet at the same time, I feel that I have always been swimming in the same sea, an environment that is connected to something more real than my life, something everlasting and generative and filled with surprise and delight and a little danger, something that moves and bathes and buoys.  I tend, now, to think of that as life with God, life in the ocean that spills out of the Creator's hand and goes everywhere, wherever there is life, including eternity, with me and everything else swimming or floating along in it.

Paul Tillich famously referred to God as the Ground of Being, our Ultimate Concern.  The Foundation of everything.  I like that, but I like better the idea of God as generative, flowing ocean in which we float and swim, somehow connected but not necessarily tethered to the bottom.  I like the idea of being part of a community that moves, that streams, that supports and shelters all kinds of life but doesn't sit still.

Even if I do live in the same house.  I'm floating (and sometimes swimming) through my life, buoyed and buoyant.
Email Post
Labels: Creation Mystery relationship salvation the journey