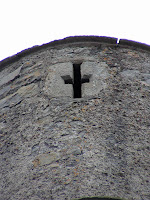 This is part of the Enniskillen Castle in County Fermanagh, Northern Ireland, which was the seat of the Maguire clan way back when (15th century-ish). My grandmother was a Maguire and her grandfather emigrated from Ireland in the early 19th century, so we like to think of this as the family castle. We visited it a few years back. The window, of course, is one of those famous "arrow slits" through which archers could shoot while remaining shielded from outside attack. The fact that it is shaped like a cross is perhaps incidental, perhaps purposeful.

But it touches off an uneasy feeling about the church as fortress. Various doings in the Roman Church (including the most recent bizarreness in which ordaining women is newly listed as a sin on the same level as child rape) and the Church of England (in which certain groups are bringing back old writings from the sixties about how women to work is ruining society for everybody - but especially males) and in our own country where battles over the inclusion or exclusion of LBGT people at church (both as lay and ordained ministers) continue to make the church look like it has nothing to do with the spread of the Gospel and much to do with crouching behind heavily guarded walls, armed, swearing at one another and reloading. I am sad for the church and sad for the world.

I know God loves us all. I imagine it must break God's heart to see God's beloved people embroiled in this kind of internecine warfare via the church, which is supposed to be God's church. I wish I could just look away, but it's like a wreck that one can hardly help but watching even as one knows it's best not to.

But I shall try. I've got other stuff to do.
Email Post
Labels: angst Ireland The Church