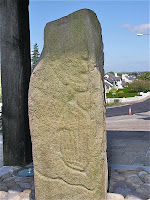 This is one of the two side stones at the 7th century cross of St Patrick in Cardonagh on the Inishowen Peninsula on the northern part of County Donegal, Ireland. It shows King David and his harp. The other side of this stone shows a warrior, which could also be David or it could be Goliath. Or just "a warrior."
David, of course, had a checkered history, as did most of the great figures in the Hebrew Bible. (The New Testament is also filled with flawed figures with whom Jesus hangs out anyway.) Just goes to show with what God has to work - or with what God chooses to work. I think both sentiments are appropriate. Most of us have checkered histories, too. The two-faced stone with harpist and warrior is a concrete rendering of the dichotomy, not only of David but of all of us. Although in the "Onward, Christian Soldiers" sense (a sensibility I am long past admiring), the warrior might not signify sinner to everyone. It's probably hard to render "adulterer" (among other things) into a stone slab.
Maybe it's appropriate just to say that all of us have more than one aspect to our personhood and that some of those aspects are less admirable than others - but God loves us anyway.
There is a gospel song called "Little David Play on Your Harp" - many of us have heard a children's choir sing it. So whenever I look at this picture, I think of that song. Click here to hear a great recording (on vinyl) by the Fisk University Jubilee Quartet from the 1920's (bonus track: "Shout All Over God's Heaven"). I tried in vain to find a YouTube video of James Taylor performing his version, which is my favorite because it knocked the socks off the children's choir version I first knew, but you can hear a sample on Pandora here.
Email Post
Labels: Ireland music