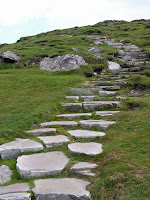 It's time to make plans to go places. Even if one is still stuck at home, even the "making plans to go elsewhere for even a couple of days" activity is enlivening. So I'm planning a couple of getaways in addition to a "work trip" over the next month.

The other day we were going somewhere in the car and my husband and I were reminiscing about summer trips in the family car without air conditioning. (This in response by one of the kids that riding on the interstate with the windows down was annoying.) We talked about what it's like to drive all the way to Florida, getting hotter and hotter all the time, with the windows down to "keep cool." Those of you who remember that kind of trip will no doubt also recall the part about how your legs or arms stuck to the seats even though you were all sweaty and so you ought to have been able to slide right out of there. But somehow your skin stuck to the seats.

My aunt, who did not sweat, had those folding loosely woven (plastic? straw matting? I don't know what it was made of) covers that one plopped on top of the bench seat, which eliminated the sticking part, but it did make funny patterns on your legs. (My aunt's legs were not uncovered, of course.) Also this cover kept you from getting burned by the hot seat when you got back in after your lunch stop or shopping trip.

And we only got AM radio, with limited distance during the daytime (at night you could listen to WLS from Chicago and sometimes WOR in New York City all up and down the East Coast, which was so exotic to a small town Southern girl like me), and with all the windows rolled (and I mean rolled - we hand cranked them) down, the radio was out anyway as far as trips went.

Now most of our travel is in climate controlled transport and we can carry our own music with us via iPod or other MP3 player, although there is still radio in the car and the airlines furnish you with many musical options.

Actually, when I was traveling back in the windows rolled down days, we often sang in the car. My mom liked to sing and she would lead us through a playlist featuring "I've Been Working on the Railroad," "She'll be Comin' Round the Mountain," and "On Top of Old Smokey," among others. You can sing pretty loudly with the windows down, which feels good. (Don't you think it feels better to belt one out than to sing softly?) Or you could stick your head out the window and sing one note with your mouth wide open and listen to the weird sound it makes inside your head. (Is this what dogs are doing when they travel with their heads out the window and tongues hanging out?)