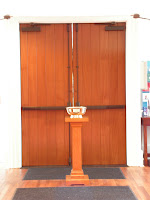 Remember Monty Hall's show "Let's Make a Deal," in which contestants dressed up in silly costumes brought crazy stuff from home (a boiled egg, an old fan, a football) that Mr. Hall would then buy from them in order to start off a game of buying, selling, and trading? One might end up with thousands in cash from plain envelopes, a mink coat inside a trash can, or a car behind a curtain. Or one might end up with a trash can full of dog food or an empty envelope, or a goat. Math geeks like to talk about "the Monty Hall problem," which has to do with probabilities and how people make choices between door number one and door number three when they know that there is a goat behind door number two. (I hated probability in school and so that's all I'm going to say about that.)

There's also a country and western song about how "my whole world lies waiting behind door number three." It's not clear what the song is actually saying, other than it's about the show and that the singer is sure that the object of his dreams is behind one of the doors and he will do everything he has to for the chance to win it.

Probabilities aside, we are often invited to trade in something we have in our lives right now for something that beckons beyond the doors of where we are right now. And just like on the show, sometimes the trade is a good one and sometimes it's not. I suspect that many of us entertain the fantasy that our whole world lies waiting behind a now-closed door and that we have to do everything we can to get that door opened to us. A dream job, a dream house, a dream girl or dream guy, a dream life.

The photo here is from a lovely church where I will attend a workshop tomorrow and serve as the guest preacher on Sunday. Notice there's a baptismal bowl just inside the door. One has to pass it on the way through the door - when both coming into the church and going out. It is there to serve as a reminder of our baptismal vows as we come in and especially as we go out into the world. If we choose to come through that door, either way, we trade our old life for new life, we trade life that leads to death to life that leads to eternal life, life abundant here and now.

Not everyone wants to make the trade. If we take it seriously, we have to let go of a lot of things and take on some new ones. It seems daunting - letting go of striving, of being utterly self-reliant and instead taking on trying to love our neighbors as ourselves and respecting the dignity of every human being. We worry there may be a catch - what if we have to trade in our brains, for instance? (After all, it appears that some people feel that using one's intellect is antithetical to living the Christian life.) Or our common sense, or our belief in evolution, or being able to practice yoga, drink wine, accept gay people....

This is a false choice, though. God wants us to bring our whole selves to the altar, our bodies, our brains, our questions, our real lives. God wants us to know that God is good, creation is good, we are good. What we let go of are the things that truly bind us - crabbed hearts, prejudice, fear, ignorance, being victims, making victims. God's world is big and wonderful and full and we are called to life full lives.

I like to think that a closed door will open to me if I am to walk through it. I don't think God plays Monty Hall in our lives, trying to trick us into trading in what we have for a chance at a fantasy prize. I think God does call us to walk into new places, but not alone, for God walks with us (even through the valley of the shadow of death); I think that God does hope we will lay down our sorrows and our striving in order to receive life abundant. I think that whatever it is that lies behind the doors that now appear closed to me, my job is not to weigh trade-in options and strategies to get behind it, but be open to hearing God's beckoning and to trust that God's call is always into life and not to disappointment.
Email Post
Labels: listening for God risk-taking salvation