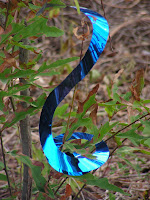 As summer rolls on, restlessness meets lethargy. I may have an idea of something I'd like to do and then I will decide it's too hot (or thunder-y and lightening-y) to do it. The summer heat saps my energy and the yard is full of mosquitoes (and they get in the car with me when I go out). I think I need a new shiny - something novel that will entice me to break out of the summer doldrums.

So far, however, my attempts have not met with great success. I had a movie spree, which is always good to do in the heat, but that's over. Plus I watched most of them at home, which does not count as getting out. Going out to the grocery store and to get gas or otherwise do mundane, routine, repetitive chores also doesn't count. In fact, doing routine mundane stuff makes the doldrums worse. I get tired of buying the same stuff every week. I don't think I am cut out for the whole weekly grocery shopping thing. (In fact, I try to not go every week.)

I will have an adventure soon - driving to my mother's house one last time to bring her here. That will certainly be an adventure but there may be crying involved, and that may not be what the doctor ordered, either.

I remember being young and thinking that summer was so short. I also didn't mind the heat so much. Now I think it drags on forever and am surprised at how much the heat affects me. I suppose people who live in cold climates with not nearly enough sun feel the same way about winter where they live - they become increasingly susceptible to staying indoors too much because the weather is getting the upper hand.

I look forward to a change in the weather and a change in my attitude.
Email Post
Labels: change of scenery