The Good Samaritan: A sermon 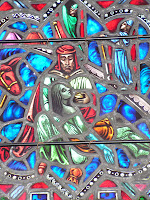 Even in the Bible, there is this problem about lawyers. They are seldom treated with respect, which is sad, because I am sure there have always been lawyers who are decent people. Of course I am married to one, so maybe I’m prejudiced, but I’m sure you can agree that our Gospel reading is not just another lawyer-bashing story and that we need to look past the labels on each of the characters Luke uses to tell this story that we all know so well.

In fact, our knowing it so well probably makes what was a shocking story to Jesus’ audience into a tame one among us, a story we can easily parse to produce a clear moral. But then, parsing is what lawyers do, isn’t it?

Anyway in the story today, a lawyer stands up to test Jesus. First, he asks Jesus what he is supposed to do to inherit eternal life, and Jesus says, “You read the scriptures yourself, don’t you? How do you interpret the Bible in this matter? What do you think you’re supposed to do?” Which is a response we should pay attention to ourselves. Jesus expects us to know our Bible and also to be able to interpret it.

And the lawyer gives the right answer. He quotes the Torah, the law: Love God and love your neighbor as yourself. Correct.

But then the lawyer wants to justify himself. And so he asks, "but who is my neighbor?"

And Jesus responds to his question with the story about a man who was beaten and left lying half-dead by the road, and how two people crossed to the other side of the road to pass him by, but a third person - a Samaritan who shouldn’t have been there in the first place and who didn’t associate with Jews and vice versa - this Samaritan saw the beaten man and instead of passing him by, was moved by great compassion to help him. The Samaritan stopped on the dangerous road, bound up the beaten man’s wounds, took him to an inn, paid for his continuing care, and promised to return and take care of any outstanding bills. It was an extravagant response.

Then Jesus asks the lawyer a question: “who was a neighbor to the beaten man?” And the answer must gall the Jewish lawyer. The hated Samaritan is the one who acted like a neighbor. Jesus has turned the question around from “who is my neighbor” to “how am I to be a neighbor.”

But this is more than a moralistic story. This story would have been shocking to those who heard it. The Jews and Samaritans hated one another; their feud went back for hundreds of years. The Samaritans were of mixed heritage, made up of people from God knows where whom the Assyrians had imported into Israel when they conquered it, who then intermarried with what few and unimportant Jews the Assyrians left behind. The Samaritans had their own scriptures and worshiped in a place other than Jerusalem. Each considered themselves the real chosen people. The two groups did not mix and their rivalry was legendary. So it was shocking for Jesus to tell a story in which the hero was Samaritan and the bad actors were Jews.

Now, let’s turn the story around and experience some shock value ourselves. What happens if we put ourselves in the beaten man’s place? Would we even be asking such a question as who is my neighbor? The lawyer is trying to qualify the term neighbor - to narrow it down - to determine to whom he owes attention and by implication whom can he ignore. He is looking for loopholes. But if you’re the man in the ditch, do you care about any of that? Do you think that you’d lie there in gentle understanding if someone were to shout over to you to explain that they can’t or won’t help you because you are not their neighbor? Oh, ok, I’ll just lie here dying and wait until an appropriate neighbor comes along.

Or what about this? Are there people about whom you would say, I’d rather die than let that person help me? I’d rather just lie here and die than experience the compassion of someone I don’t know or don’t like or whose theology or politics differs from mine or who is of the wrong color or class or sexual orientation? Yeah, just go on and pass me by and I’ll wait for a more appropriate person to show me mercy.

And this is so hard. We tend to want people to get what they deserve and deserve what they get. And there are so many people in need, all the time, everywhere. So we look for ways to narrow things down, to make life manageable, to keep from being overwhelmed by the sheer magnitude of the world’s grief and lack and want and need.

This is where I have compassion for the lawyer. This is where I find myself in the lawyer’s shoes. How on earth can I figure out what to do in the face of unrelenting poverty and brokenness? I am bombarded daily with stories and images and the sight of people who are homeless and hungry and beaten and hopeless and addicted and dying. I am constantly being asked to help here or there, this cause or that situation. Surely there is some way in which I can determine whom I ought to help, who deserves my attention, among so much need, without simply becoming numb to it all.

But again, if I am in the ditch, do I care about any of that? Does any of that matter? Must I position myself as deserving in order to receive mercy? Does God parse us that way, so that only the deserving, the appropriate among us receive grace and mercy and the unfailing and unqualified love of God?

So you see, this is not a straightforward story with good guys, bad guys, and a neat moral at the end. We might try to make it one, and when we do I think it is because we know how difficult this whole concept is to work into one’s real life. We are intelligent, caring people, and what we see out there in the world is overwhelming need. And we know how powerless we often are to help, to make a difference. We are so often captive to our own fears, our uneasiness about strangers, our worries about our own safety. We’ve heard stories about traps and setups and con men and we’ve heard propaganda about how people don’t deserve to be helped anyway and they should pull themselves up by their bootstraps et cetera et cetera.

So how does one respond to the great need of the world? The same as eating an elephant - one bite at a time. We learn to see need when we come upon it. It doesn’t have to be the entire world’s need. It can’t be the entire world’s need - none of us has the capacity for that. The need that’s right in front of our nose, on our particular journey, today, is the need to which we are invited to respond. We know we cannot help everybody, but we can show mercy to somebody. We can put our beliefs into action without being overwhelmed ourselves by focusing on the one whose needs we can see now. It takes practice and we may have to learn from those whom we never expected and do not want to learn. But this is what we vowed at our baptisms: we will seek and serve Christ in all persons and love our neighbors as ourselves, with God’s help.

The Samaritan had the eyes to see the suffering man in the ditch. He did not avert his gaze but allowed himself to feel compassion without applying any rules about it. His focus was on performing the action of a neighbor, rather than discerning the identity of neighbor.

Here is a story I read a year or so ago about neighbors. There is a group in the Middle East called the Parents’ Circle - Families Forum whose members are people whose parents or children or siblings have been killed in the ongoing conflict between Israelis and Palestinians. Half of the group is Israeli and the other half Palestinian and they all have had their lives torn apart by violence. And they all have decided that they can and will work together out of their common experience of raw pain to to promote peace among a people caught up in hate and vengeance. The Israelis and Palestinians have developed the eyes to see one another as brothers and sisters who have suffered the same grief as they have: they know that the blood of both tribes is red in their veins and when it runs out on the ground; that all bitter tears are salty. They know that only love will heal some wounds. And so once, after a particularly bloody day in which suicide bombings in Israel were retaliated against with car bombings in Palestine, members of the group decided to give blood. The Palestinians went to the Israeli Red Cross in Jerusalem to donate blood for Israeli victims, and the Israelis slipped behind enemy lines into Ramallah to donate blood at a hospital that would treat wounded Palestinians. I never cease to be inspired by this story.

A neighbor knows no boundaries, forgets categories, and shows mercy to those in need. Jesus said, go and do likewise.

Living God, for whom no door is closed, no heart is locked, draw us beyond our doubts, till we see your Christ and touch his wounds where they bleed in others. Amen.