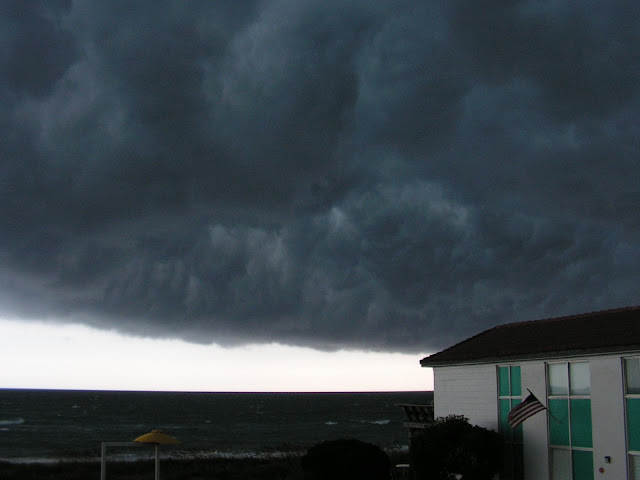 I took this photo a couple of years ago at Atlantic Beach, NC, as a thunderstorm was rolling in.

We have a bigger storm rolling in now, one that covers a lot more of the country and has the potential to become a superstorm should it collide/combine with a couple of other weather systems coming down from the Great Lakes and elsewhere.  Plus, it's a full moon and so the tides are especially high already.  The potential for flood damage from the storm surge is of particular concern.

So far, we here in Williamsburg are just getting a lot of rain. We have rivers on either side of us - the James and the York, but the city itself is built on a ridge on the peninsula.  Father down into the Tidewater areas of Hampton, Norfolk, Virginia Beach, etc. there's even more water around already - the ocean, the Chesapeake Bay, several rivers, creeks and marshes.  The flooding of some streets in low-lying areas has already started.  When the wind gets up, things could get trickier, particularly if it knocks out power.  On the other hand, the chance of our getting hurricane-force winds is fairly low.

When stuff like this happens (or more to the point, while we are waiting for stuff to happen), nervousness breaks out. Should we stay home even though nothing's happened yet? Should we cancel things like church or school or meetings or airports or public transit? How do we determine what's essential and what's not? And who makes those decisions?

Different people answer these questions in different ways.  The situation calls for a great deal of forbearance, I believe.  And calmness.  And generosity.

Penelopepiscopal said…
Thanks, y'all. This morning we are still just really wet with only occasional wind gusts. Being on a ridge means flooding is unlikely here, but many other parts of the state are looking at far worse conditions. The good thing about the storm moving so slowly is that everyone has been able to prepare.
October 29, 2012 at 9:06 AM

Perpetua said…
You are all in my thoughts and prayers, Penny. It's such a huge storm and even if it turns out not to be as bad as feared, it will still affect the lives of a lot of people.
October 29, 2012 at 5:32 PM

Penelopepiscopal said…
Thanks, Antonia! Things will only get better here, but keep the people in New York and all the coast in your prayers. There is so much water and this storm is so huge and moving so slowly.
October 29, 2012 at 5:37 PM

Penelopepiscopal said…
Thanks, Perpetua. It is huge and moving so slowly. The photos from the coast and New York show nothing but water, water everywhere.
October 29, 2012 at 5:39 PM