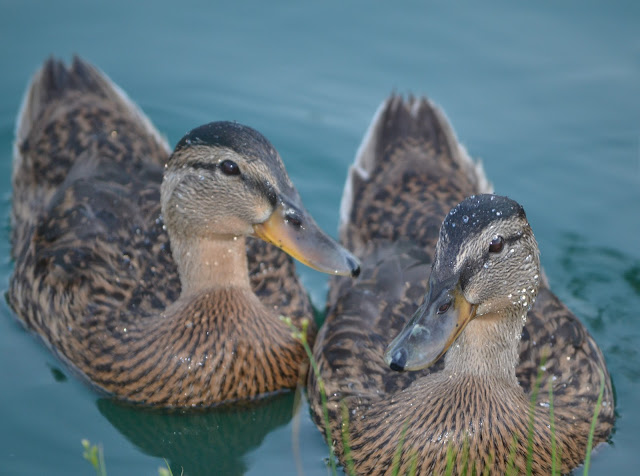 Well, I've lived here for a year now, so I am not befuddled by the sudden decrease in the population at the duck pond.  I know that they fly south for the winter.  Some are still around - the youngest ones, I think, some of whom are still a bit in the process of changing their feathers so you can finally tell which are the males and which the females.  But generally, fall is here and the ducks are starting to take off.

The other afternoon it was sunny and warm and I sat by the pond on one of the benches for a while near the end of the afternoon, finished with my walk but not ready to go inside yet .  The young ducks still come over when one sits on the bench, hoping for some cracked corn or other such duck delicacies.  One of them was hopping, and I saw that there is something wrong with one of his feet. It was misshapen and he was holding it close to his body.

After the other ducks departed upon the discovery that I in fact did not have a bag of cracked corn on me, the injured duck settled down for a nap about two feet away.  He tucked his beak into his back and closed his eyes.  I guess he felt safe.

When a neighborhood child came along with her wagon, the duck quickly woke up and hopped away to the pond, jumping in and gliding toward the center, his hurt foot still hanging useless against his belly.  When the danger had passed, he returned to the sunny bank in front of me and resumed his nap.

It made me sad to see him, even though he was obviously handling his disability well.  I thought of what my dad might have said about him (a fox will get him soon enough) and remembered the tension I often feel about such things. I feel sorry for hurt animals, and I know that they die and are eaten or starve or whatever; I know that "nature is red in tooth and claw." That's kind of how life is.  I know that and for the most part, I accept it.

But I don't have to like it.  I'm still sad about the death of my pet rabbit and seeing an injured duck just made me sadder.  I wonder if he will fly south or will stay in the bond all winter. And if he does, won't he be alone? There was a lone male who stayed most of the winter last year, too. And I felt sad for him, too.

Life is hard. We have to learn to rejoice in the moment, enjoy the beauty, while still recognizing the injustices and sadnesses and somehow not letting them overwhelm us. It's a delicate balance.

I always felt that my dad thought my tenderheartedness was a flaw.  I ought to be tougher, he said.
But I'm not, and there it is.

Ray Barnes said…
No, Penny, I know I have no right to say it but, your dad was wrong about this.
Compassion for all of God's creation is a basic tenet of Christianity. (St Francis was a supreme example).
Anything which touches us with tenderness or compassion blurs some of the edges between being merely human and being a human who tries to walk with God.
Poor little Mr Bunny and poor little duck.
At least he has a chance of recovery.
As you so rightly say, sadness is a part of life and we must do our best to absorb it.
October 15, 2012 at 5:17 PM

Perpetua said…
Ray's said it all already, Penny. Keep your tender heart - creation needs all the tenderness it can get. Here's hoping your little duck makes it through the winter.
October 15, 2012 at 6:08 PM

Penelopepiscopal said…
Thanks, Ray. I like what you say about tenderness and compassion being a hallmark of one who tries to walk with God. I believe that God is compassionate towards us and all of creation and that we ought to be, too.
October 15, 2012 at 8:00 PM

Antonia said…
Yes, Ray's said it all but I wanted to add I've only just come upon this post after a busy few days which have left me a little raw, and it's touched my heart and brought me tears - and consolation. I'm thinking of Julian of Norwich and the fragility of her little hazelnut of creation; of Ephraim the Syrian who said that one who grows close to God will weep "even for the reptiles" with compassion.

If we can feel so much, how great must be the compassion in the heart of our loving God who cares for the sparrow? God bless your duck, and the sparrows who are just now eating the seeds I've put out for them as evening approaches here, and all of us... "All shall be well".
October 18, 2012 at 10:27 AM

Penelopepiscopal said…
Thanks, Antonia. Compassion is a good thing but it makes us so vulnerable to pain ourselves. We do what we can do, which is care. Thanks!
October 18, 2012 at 7:33 PM