Considering the birds of the air... 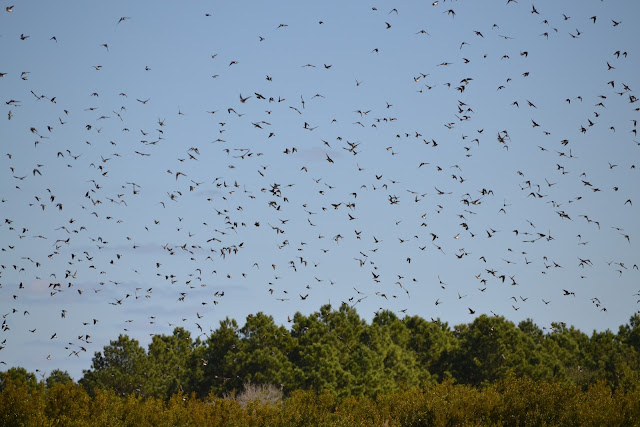 Yesterday, I went on an all-day outing to my favorite outdoor  haunt, the Back Bay National Wildlife Refuge, a strip of earth situated between the Atlantic Ocean and Back Bay, about an hour and a half away. I try to go at least every six weeks or so to get in some beach time (which is also serious prayer time for me) and to make sure I'm spending some quality time outdoors. The refuge is interesting any time of the year to someone like me - there are all kinds of critters to see any time I go.

This time the most prevalent critter was the swallow.  Hordes of swallows filled the air over the shrub-filled open fields. They would roost in the trees for a few minutes only to rise up as a whole and swirl overhead again, swooping and diving and speeding past. I never could get a photo of an individual swallow, but you can get a glimpse the effect of the concentrated mass of them in the photo above - except imagine about twenty times what you see here.  They filled the sky over and over again as I walked the three miles of open field trail through the interior of the refuge.

As I watched them flocking to the trees and rising to the sky and soaring and speeding past, I wondered what it is like to be driven by the kind of instincts and innate knowledge that migrating birds are. They take on the incredibly arduous task of flying thousands of miles each year, of dealing with the elements and predators and sickness and death without the kinds of comforts we humans rely on - warm beds, hot drinks, soaking tubs, books to read. The lives of animals are different from ours, but they are still complex and they still end in death, sometimes with suffering.

And so it was good to be among alien creatures on a beautiful day on earth, knowing that for now we are alive and together and that God has given us all that we need or will ever need.