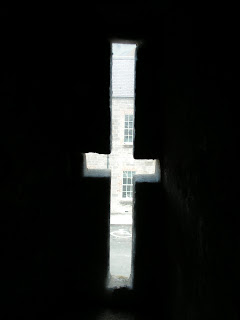 Last night I watched another Erik Poppe movie called Hawaii, Oslo, the second of three movies he made that take place in Oslo, Norway (I wrote about the third movie, Troubled Waters, here).  Although I enjoyed watching Troubled Waters more, this one was certainly thought provoking and one I will continue to ponder.

Hawaii, Oslo is in the stream of those Robert Altman ensemble movies in which several stories are being played out simultaneously, with some rather slight links between and among them.  The links between the stories in Hawaii, Oslo seem to be the presence of two people, a 30-ish male mental hospital worker and a young newspaper delivery girl, who meet only in one scene near the end of the movie in which their conversation in its entirety is something like "neither one of us is what we seem to be, are we?"  Perhaps they are guardian angels; perhaps the young man is even a Jesus figure.

At any rate, as the stories slowly unfold (a mental patient who nervously awaits the arrival of a young woman who saved his life as a child and who promised to marry him in ten years; two young delinquent brothers whose father has died; a woman who tries to commit suicide; an ambulance driver who saves the woman; a young couple who find out that their baby - born in the ambulance - has an inoperable heart defect that may or may not be able to be treated if they can find the money to go to the U.S.; a prisoner who is the brother of the mental patient and is planning a jailbreak), we become aware of the links between some of them (the delinquents steal the purse of the fiancee, two characters plan to rob the same bank, the suicidal woman is related to the delinquents).  The pieces begin to fit together, slowly.

Meanwhile the two "angels" work in different ways to intervene in the lives of the people they seem to be "assigned to." The girl finds the dying woman and calls the ambulance, sings "like an angel" at the funeral of the father, delivers a hug that finally calms the out-of-control delinquent; while the man tries to avert an accident he has dreamed about and makes a disciple of the ambulance driver, who then himself becomes a link to several of the characters after the Jesus/angel exhorts him to make and keep contact with the suicidal woman.

I don't want to give away the ending, but let me say that nearly all of the characters are brought together in the wake of a sacrificial death and that restorations occur and second chances are found and that undeserved and unexpected gifts come from seemingly random actions (including the trash).  And that two hugs play important parts in the story.  And, finally, that "I love you" is the last word.

All of this sounds complicated, and it is, and the movie sometimes taxes the viewer with frustration at not being able to make sense of the scenes as they are happening or to see the connections until much later.  And yet it boldly (remember, this is a Norwegian movie) proposes the idea that there is some force for good, a force perhaps even present among us in the form of angels, that weaves around within our desperate and sorry stories of loss and degradation in this life to bring life out of death.  And that that force becomes a web that links people together through the actions of those who are willing to literally touch others, to be for others in relationship.  And sometimes that force, those relationships, spin off positive consequences that land in the laps of others.  The web does good, even to those who do not seem to be part of it.  And it plays out in this incredibly messy, complicated world in which for the most part nobody is really looking.  (Which is why urban Oslo makes a great location for the movie.)

Is this not what we proclaim as Christians?  That it is in relationship, in literally touching others who are suffering, that we give hope to a world that is desperate with despair?  And that God brings good out of sorrow and evil and that somehow we receive gifts from unexpected places just when we are at our lowest point?  That somehow Jesus' sacrificial death drew all people to himself and brought about healing and restoration and life to others? That the world will be transformed by this love in this life?  This is all a mystery, and I guess if any movie that tries to get at this message is going to be shrouded in mystery, too.

You can watch the movie on Netflix (streaming).  If you decide to see it, come back and let me know what you thought.
Email Post
Labels: Advent Angels movies Mystery