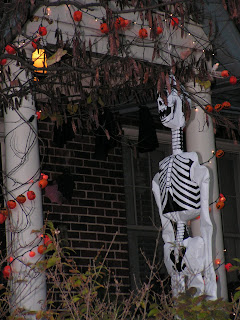 Here in the South, fall goes on for a long time.  It may be snowing in the Rockies and Appalachians and Great Britain and The Great Lakes area, but here we've still got lots of leaf raking to do.  I always find the "seasonal decorations" amusing and somewhat out of kilter between Halloween and Christmas.

The natural decorations progress fairly quickly through pumpkins and squash and cornstalks followed by colorful leaves followed by bare trees.   Ditto the the man-made decorations - houses covered in cobwebs with graveyards on the lawn, or giant masked Snoopy and Woodstock inflatables, followed by all sorts of Christmas stuff - giant inflatable Santas on skis/in snowglobes on green lawns, penguins and reindeer and lighted trees of all colors and large Christmas ornaments suspended from trees that still have a few golden leaves hanging on.  In early November on my street, one may see a mix of all these lovelies on the same day, because the Halloween enthusiasts have not taken their stuff down and the Christmas enthusiasts put their stuff out earlier and earlier each year.

Not many folks wait until Christmas proper to decorate, and in fact, many of the decorations will come down by the second day of Christmas.   I, however, still haven't raked the leaves, although I do have my Advent wreath on the table.  I'll get around to the leaf raking soon, as I'm about to have a little more time on my hands.  And I'll bring out the winter-themed china soon.  But Christmas decorations don't go up at my house until after the 20th of December, as I will keep them up through Epiphany.  I still like to keep the liturgical seasons at home, too.
Email Post
Labels: Advent Fun