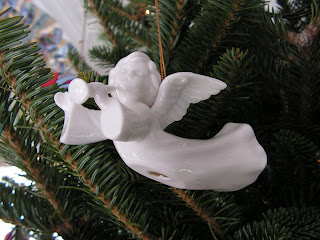 The holidays have been very busy (mostly in a good way) so I have hardly had time to sit and reflect until now.  This morning I'm having a "quiet" morning.  It's enforced.... the oven repair person came first thing and nobody else is up and around.  The garbage, yard waste, and recycling trucks are making their way down the street (having ignored, again, the bags of fall leaves we put out two weeks ago).   So life is getting back to normal for at least some folks, if not me.

I take time every day to sit and reflect, if I can - during Christmas it usually means sitting near my tree to read or staring into the fire or listening to Christmas music (and no, I'm not sick of it - I manage to tune it out during most of Advent).  But when things are busy, time to sit are few and far between.

I think it's important to take time to sit, especially during busy and stressful times.  Christmas is usually busy, and for many people it is stressful as well.  Even if it's in a good way.  But of course there are other stresses that are not so good; my lack of an oven during all the time we were having big meals with extended family was as it turns out a small stress, thank God.  Yesterday I saw one of the regular homeless guys who hangs around a local fast food joint and thought about how cold it's been these last days and nights, not to mention the snow and ice, and wondered where he's been sleeping.  He never seems to have a coat.

And actually, that sighting was one of my joys this holiday.  The man came in, as he usually does, and sat down and stated, not very loudly and to nobody in particular, that he wanted something to eat.  Then he sidled up to a couple of guys eating their lunch, but they quickly turned him away.  (He never comes to me - he prefers to ask men for help.)  He again mumbled something about being hungry and moved to another group of tables where there was another couple of men eating.

Here he had more luck.  One of the patrons noticed his Army-green hat, upon which someone had written with a Sharpie:  USA and POW.  He asked the homeless guy where he had served (I didn't get the response - I was supposed to be attending to my own conversation with my son) and then said, "What, you want some lunch?  Sure, I'll buy you some lunch."  The homeless man assured him he was going to order it and eat it right then, that he wanted the money for lunch, that's all, and he got into the line.  As he carried his potato and burger over to a corner table, the patron called out to him and mentioned his own military service and the two of them compared notes and had a few words and even a laugh about something.  Then the homeless man went to his own table and tucked into his well-buttered potato with relish and the patrons left to go back to work.  The exchange was heartfelt on both sides, which is unusual in these cases, where money may be handed over but done so grudgingly and with no real conversation or connection.

Of course the fast food joints are no longer playing Christmas music; for them, Christmas is over.  But for me, the scene was a Christmas scene.  A hungry one not only received something to eat, but also was recognized as a fellow human being and even as a kind of brother.

So I only have a few minutes to reflect this morning, but then again, that scene at the fast food place took all of five minutes itself.  Encounters are often brief, but meaningful.