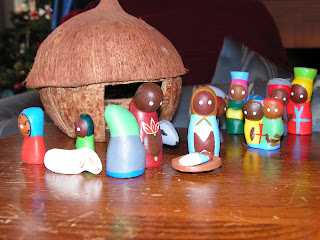 I'd forgotten how crowded church is on the day of the children's Christmas pageant if you are not already guaranteed a seat by virtue of being one of the clergy on staff.  So this year, we sat in the chapel for the pageant.  It was like being backstage at the ballet.  We never saw (until the pictures were up some hours later on Facebook) the action out front, but instead were privy to the equally special goings-on behind the scenes.

Many churches are going to the "no-rehearsal, non-anxious pageant" model, by which they mean that there are no rehearsals except for the three or four key players who have been chosen for their parts:  Mary, Joseph, Gabriel, and the Star (in this case, an angel carrying a fishing pole with a large star dangling from it).  All the other children of all ages are invited to either avail themselves of costumes from the church closet or wear home-grown ones and to step into the pageant at the correct time during the narration.  Hoards of angels wearing tinsel-garland halos (along with the occasional Blue Fairie or Disney Princess) crowd into the choir stalls.  Lots of shepherds wearing cloths on their heads, and either plaid shirts and Gap khakis or wrapped in tunics with a rope belts, carrying crooks (which double backstage as fighting instruments or props for the game of two children clasping the staff hand over hand until one gets to the top) stream forth at the time when shepherds come into the story.  Many friendly beasts come forward to kneel around the straw bales - sheep, cows, tigers, Winnie-the-Pooh, ladybugs, etc.  And wise persons wearing crowns and capes or white tights with black patent leather shoes and ruffly dresses process along behind the star.

I was quite pleased to see how varied the groups were in terms of gender.  It used to be that girls were angels and boys were shepherds, but today I saw several male angels and female shepherds, and of course wise people of every age and height, not just old wise men, followed the star (as is always the case in real life as well as pageants).

What this looks like backstage is not exactly chaos - although it's not a calm or quiet or particularly organized scene.  It's more like what a child's view of most things turns out to be:  the main action is not really in view and it is not terribly clear where the boundaries are or where the proper paths forward start or end.  The vast crowd of parents and parishioners sees the story from the front view, told by happy actors - the "hams," the well-coached rule-following achievers, the eager and enthusiastic.  But from the back, one gets to see the shy ones, the less confident ones, the hopeful but slightly fearful not-so-sure ones, the ones who want to take part but don't want to stand out.  The ones who don't want to walk all the way up the long aisle in the nave and so slip forward and sideways through the chapel.  The tiny ones that are happy to stand in the shadow of the more experienced angels and wise people, who may become mesmerized by the altar or the choir chairs or the priest's vestments or the neighbor's rope belt rather than the action out front (which they may not be able to see anyway).

I saw many pair of shining eyes beneath those cloth headcoverings and tinsel halos and crowns and furry spotted cow-cowls as they made their way back to their parents at the peace.  The pageant is where the story of the Baby Jesus is truly told in all its glory, and the opportunity to take part in it (in the part of the church that is already rather mysterious) is nearly irresistible, even for the painfully shy.  We all want to edge in, to slide forward on our knees just another inch or so toward the baby, toward the mother, toward the tallest most confident angel, maybe to touch the hem of a sparkly or soft robe.  To be part of the story in a way that, sadly, becomes harder and harder as one grows older.

During the Eucharist, I did help distribute the bread, and I blessed a young pillow-case wearing shepherd and an angel in arms, which was lovely.   But what I also noticed were the shining eyes and the eagerly outstretched hands of the grownups and even a few teens and young adults who were inching forward to also be part of the story again, to receive the Lord amid the music and the crowd and the slight chaos that always accompanies communion distribution in the chapel where there's really not enough room and many traffic patterns working, both planned and unplanned.  Maybe it's because I knew so many of the people who came to receive communion - they are the ones who raised me to to become a priest - but there was great joy in the giving and receiving of the bread and the wine.

I love the "come as you are" pageant.  Why not a Disney Princess, or Superman, or Winnie-the-Pooh mixed in with the traditionally attired folk who are all coming to adore Him?  And the view from backstage allows for a glimpse into the inner workings not only of the play but also of the players as they enter into the story as best they can this year - who knows what next year will bring! - and then return to their seats with shining eyes and their own stories to tell.

O come, let us adore Him!