A sermon about John and Jesus (Advent II Year A) 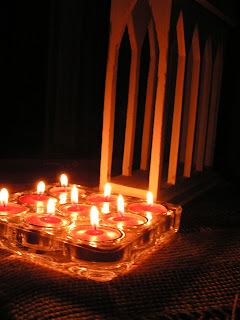 
John the Baptist, who appeared in the wilderness dressed in hairy clothes, is not our favorite Advent character.  We'd much rather hear about the Angel Gabriel, or Mary, or Joseph, or shepherds or just about anybody except John the Baptist who preaches fire and brimstone.  I'll bet none of you have a John the Baptist figure as part of your Christmas Nativity Scenes - he doesn't belong there, does he?

And yet, John was a very important figure in the story of Jesus.  The ancient historian Josephus writes about him in his history book.  And all four Gospels start off with him - you can't even get to the beginning of the Jesus story without going through John the Baptist first.

While Luke gives us a story of connection to explain this oddity, claiming that John and Jesus were really cousins, none of the other Gospels mention such a connection.  In the other Gospels, just as the curtain rises to begin the story of Jesus, the first person we see is the wild man John, standing in the wilderness, calling people names.

The fact that the Gospels all feature John and go to some pains to distinguish between him and Jesus tells us that there was confusion, or maybe even a rivalry, between the two.  After all, they were both in the same region, gathering disciples, both apparently itinerant preachers, and their messages seemed to be identical:  Repent, for the Kingdom of God is near.

But John says that he is nothing compared to the one who will come after him.  He appears as the forerunner, the voice in the wilderness who prepares the way for the Lord.

So what is this all about?  Well, for us Christians, our Old Testament ends with the prophet Malachi, who says that God will send Elijah the prophet (who himself was described in Second Kings as a hairy man who always wore a leather belt around his waist) to turn the people back toward God before the great Day of the Lord.  And then the New Testament begins with Matthew, whose first scene features the sudden appearance of a guy who dresses like Elijah, announcing that people need to repent because the one who is coming after him is near and will come with fire and wind.

So you can see why John is so important a figure for us during Advent, the time when we are to prepare ourselves for the Lord's coming.  Because we know that God does new things, does surprising things, we make the connection that Malachi's prophecy is realized in this scene, and yet it is not Elijah but John and not God but God-with-Us, Emmanuel, Jesus of Nazareth called The Christ, whose day is near.

But we have to go through John to get to Jesus.   And as I said, their message seems very similar:  repent, for the kingdom is near.  But while John simply exhorts repentance, his star will fade as we will see next week, and Jesus will carry the message much further.  He will preach healing and forgiveness.  John baptizes for repentance, he says here today; but Jesus will say at the last supper that his blood is poured out for the forgiveness of sins.  This is where the story ultimately goes.  We may start with repentance, but we end up with forgiveness.

There is no doubt that we are called to reorient ourselves toward God, and there is good reason why we do this every year, over and over, because just like cars and everything else that goes, we need adjustment and realignment after a certain amount of wear and tear.  However you may think of conversion, the truth is that we have to be converted over and over again.  The church year gives us this opportunity during Advent, and John comes on the scene just as we are getting going with the season to remind us again.  Turn yourself toward God, wholly, not just sort of, for the stakes are high.

It seems to me, however, that many of us never much get past the message of John.  Back in the olden days, the hellfire and brimstone preachers like Jonathan Edwards, whose sermon entitled "Sinners in the Hands of an Angry God" was required reading back in the day, or my day at least - those preachers made sure that everyone heard the message of John.  Back in the olden days when people in the colonies were required by law to attend church, they were treated to a couple of hours' worth of drubbing every Sunday by the disciples of John:  repent, or be thrown into the fire.  God is coming with fire and is planning to throw most of us in it.  People were made to come to church and when they got there were made to listen to someone berating them and telling them they were destined for everlasting fire unless they repented.  And frankly, the actual steps to repentance, other than complete public shaming, were not very well spelled out and never really achieved.  Because as we all know, there is always something something to repent.

But John is only the beginning of the story of Jesus.  We start with him, but we don't stay with him - we are supposed to move on to Jesus.  John testified to the light, but he was not the light.  It is Jesus who shows us God, not John.  And Jesus spends much of his time healing the sick, bringing sight to the blind and making the lame walk.  Jesus brings about transformation from suffering into the fullness of life.  Jesus exhorts us to care for the poor and vulnerable, to welcome the stranger and the alien, to visit the sick and imprisoned - to bring life to others because God has brought life to us.

People apparently flocked to hear John in the wilderness.  And people flock today to hear preachers expound on just how hot the fire will be, about how we are all still sinners in the hands of an angry God.

But God is not sitting up there on a cloud just waiting to pull the rug out from under us when we slip, as we inevitably will.  Our story is this:  God is coming to be among us as a little child, a healer, an instrument of forgiveness, who would rather die for us than have us die for him.

Our Bishop once said in an ordination sermon that someone once asked him what the hardest part of being a bishop is.  He said that it was the same as the hardest part about being a priest and a deacon and a layperson, which is trying to convince people that God is really that good.   We believe the worst.  If someone is preaching love and forgiveness and someone else is preaching fire and brimstone, which one do you think gets the crowd?  What is it with our attraction to the message that we are all doomed?  Are we all masochists?   Don't we say every week in the Nicene Creed that we believe in the forgiveness of sins? And yet I guess those hellfire and brimstone sermons from back in the day continue to lurk in our unconscious.  Any other version of God sounds too good to be true.

But what about that fire?  Yes, there is fire.  It's what burns up the trash.  Chaff is the husk on the wheat, the dry, scaly part, sort of like peanut hulls, that protects the part that's good for eating.

We all have chaff, too.  Our protective outer layers.  We can't really approach God with our protective outer layer on, that part of us that's cynical and distrustful and hoarding and self-centered.  We can't bring our genuine, honest, real selves before God or before any humans with whom we want to form real relationships.  That outer layer has to be gotten rid of, first, just as the chaff has to be discarded before the wheat can be made into flour.

Sometimes we read in the Bible about the refiner's fire that burns away the dross from pure silver or gold.  I like that image even better.  We carry around a lot of junky stuff with us, and it has to be burned away before our true selves become free.  The fire burns off the dross, the junky stuff.  But it does not destroy us, our true selves.

We are not the junky stuff, the trash.  We are the wheat, the silver, the gold.  John says, Jesus separates the wheat from the chaff, and the wheat goes into the granary, God's great gathering barn, while the chaff is thrown into the fire.

And so, perhaps, we can see why it is we need to encounter John in that wilderness before we get to Jesus.  We need to know that our outer husk, our dross, our junky stuff, has got to go.  We need to remember that we must over and over again realign ourselves with God, with God's purpose for us, God's plan to bring us to health and wholeness, God's desire for us to be for others' health and wholeness too, so that we can bring our best selves, our core selves, our real selves before God and one another.  This is God's plan for us, our transformation into who our loving creator made us to be.  It happens again and again as we make our choices about how to be, how to live day by day.

The little child comes soon to lead us again toward that vision of a world in which peace reigns instead of fear.  A world in which love is preached, forgiveness is practiced, and resurrection is lived out.   Don't fall for the fire and brimstone and angry God stuff.  The fire is there to burn away the junky dross, and many of us have been through it here in this life.  And it makes us available again to experience peace, to experience forgiveness, to experience the love of God that we have feared was simply too good to be true.

But it is true.  God is love, and God will come to us in love again and again, over and over, to take away our sins, to bring us to wholeness, to give us life.   Let us all turn toward that life with blessed relief, and with joyous thanksgiving.