I am the Rose of Sharon

This is my advent wreath for this year.  Or at least for this week.  The weather has been so warm that even though it is December, I have a number of roses blooming now.  It turned much colder today, however, and I expect that either tonight or tomorrow night they will get blasted finally.  So I decided to cut a bunch of blooms and use them in my advent wreath instead of using holly and berries with the ivy (which is normally what I decorate my advent wreath with, every year).  They won't last but a few days anyway, and then I'll replace them with something more "correctly seasonal."

One thing I love about tradition/traditions is that one can tweak them a little and give them new life - in fact, it's important to tweak them a little lest they become museum pieces.  And so I have my traditional advent candles and greenery but sweet blooming roses (Penelope, Mme. Joseph Schwartz and Perle d'or are featured) join in this year, happy to be included.  I'm certain I've never had these roses blooming during any previous Advent.  (I may have had an Old Blush with a few pink scraggles - they don't call that rose Old China Monthly or Old Pink Monthly or just Common Monthly for nothing.)

Sadly, though, when it comes to church, we tweak tradition at our peril.  Many folks take great comfort in things being just exactly as they always have been.  Parents want their children to learn the same hymns and prayers they learned growing up, especially on feast days.  I have been to churches where the priests wear vestments that are nearly in tatters but they cannot be retired because beloved Mrs. So and So of the altar guild for fifty years made them.  I've heard folks complain about the new, large, baptismal font placed at the front of the church because they were baptized in the tiny Revere bowl off to the side in a private space and they want their children to be baptized there, too. 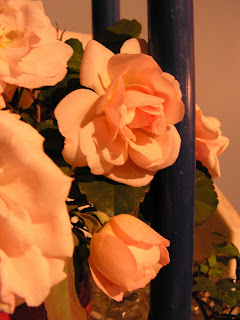 It is hard to distinguish between traditions that give life and those that simply preserve memories for a few; traditions don't come with expiration dates stamped upon them.  They are all tied up with nostalgia, memories, assumptions (which of course can often be really mistaken), and genuine respect for Tradition with a capital T, which is often a Very Good Thing.  And then there is Miss Havisham, sitting in her wedding dress, clocks stopped, looking at the moldy, cobwebby wedding cake.

I struggle with the call these days to drop some of our traditions in the church because they don't have meaning for newcomers or the younger generation.  Much of me wants to teach them to love the traditions I love.  And I think that many of our core traditions are not something we should do away with.  What I long for is a way to tweak them to make them more accessible, to make their meaning and their relevance shine out in ways that capture people's imaginations, just the way our traditions shone out to capture mine.  To add just that little something that's blooming right now, whatever it is, but to keep the structure, the bones, in place.  I'm not sure how to do that, although I've attended some workshops and read a great deal on the subject; what I do know is that we need to learn to distinguish what is truly tradition and what is uncritical acceptance of habits.