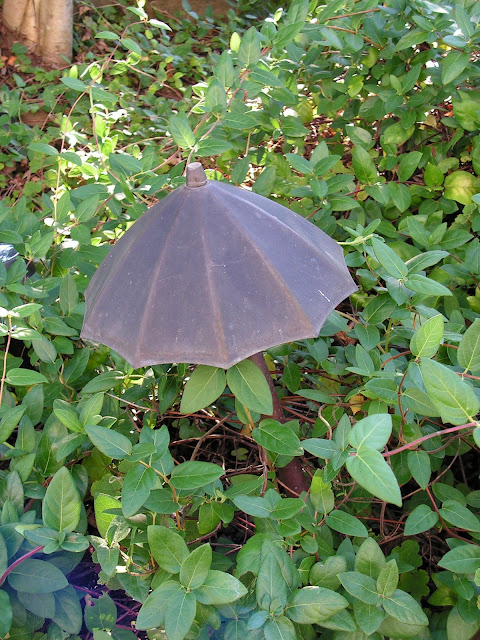 Shelter is a word that is used in a variety of ways.  Sometimes we speak of certain people as being sheltered - "protected" from the world so that they do not experience hardship or upset.  A shelter is a specific building - anything from a shed to a castle.  Shelters are places of refuge for people or animals who are homeless or abused or abandoned.  Sometimes there is a shelter at the bus stop where people can sit, out of the elements, while waiting for the bus.  Fancy magazines like Architectural Digest, Southern Living, Veranda, and House Beautiful are known in the publishing trade as "shelter publications."  We seek shelter from a storm, which (like the storm itself) can be any place, real or psychological or metaphorical.  Shelter is a place of refuge, a place of safety, a place of rest.

The New Living translation of Psalm 37:6 says that all humanity finds shelter under God's wings, a result of God's precious loving-kindness.  Other translations say that God protects humanity or that people take refuge under God's wings.  Any way we look at it, though, the fancy magazines notwithstanding, we think of shelter as a place of protection and refuge from the harshness and maybe even dangers of the world.

While I am all for physical shelter for people and animals (and wish that so many did not have to resort to emergency shelters), I struggle sometimes with the notion of sheltering people in the psychological sense.  Sometimes we do not tell people the truth because we are afraid it will shock or upset them or because we think they can't take the truth.  Sometimes family members collude with one another to keep certain information away from a child or a parent, information about a medical condition or a death or a catastrophe.  Often it is the colluders themselves who are upset and they project that onto someone else and make decisions about controlling others' exposure to information or even to parts of life itself.

It used to be that young ladies were routinely sheltered from parts of life deemed brutal or just unseemly.  Only young ladies of high social standing, though.  Little kids living in the streets or in homes characterized by lack and want (Frank McCourt, author of Angela's Ashes, comes to mind) lived amid the squalor, disease, shame, brutality and all the rest.  There have always been those for whom there was no shelter from the harsh realities of life.

According to the latest Census Bureau numbers, there are more than 15 million children currently living in poverty in the United States.  The poverty level nationwide for all ages is the highest it has been in the 51 years such statistics have been kept.  Sometimes I feel that we are all colluding with one another to keep this information "on the QT."  It's unseemly.  It's brutal.  Apparently, we don't want to know.  And no one is forcing us to look this fact squarely in the eye.

We are supposed to be the greatest and richest nation in the world.  And yet the gap between rich and poor widens while we argue vehemently in our political discourse about whether or not we ought to provide shelter (protection, refuge, a dry spot in the storm) by way of unemployment benefits, food stamps, health care, and other assistance to people in need because it is being labeled "socialism."  Once again, ideology trumps actual people.

Whom are we sheltering by ignoring this gaping wound in our society?

Ray Barnes said…
So very true Penny, and not just in America.
There seems to be an infinite capacity for some people/societies to close their eyes and hope it will just go away. (and those are the ones with a conscience).
The gap between the 'haves' and 'have-nots' has never been wider and the more we try to point to our differences the worse it becomes.
Longing for an all-inclusive society where everyone's needs are attended to may seem like a pipe dream, but a will to make it happen would be a huge step in the right direction.
August 19, 2011 at 5:38 AM