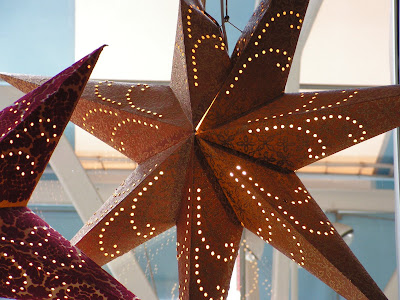 Every year, stargazers get all excited about the Perseid meteor shower, which is to be at "peak" this weekend.  (See National Geographic story here.)

Alas, this is not something we get to see here in midtown Atlanta.  Too little sky on view and waaaay too much light.  We seldom see stars at all.

I miss seeing the stars in the night sky. I grew up in a fairly rural area and we had no street lights or town lights that dimmed the sky for us.  In fact, I've always felt that I did my best sleeping at my parents' house where it was really, really dark at night.

And, oh, there we could see the stars!  We could easily see the Milky Way, an arcing band of hazy/cloudy looking freckled light studded with brighter, more defined points of light, simply by looking straight up.  We could see the Big Dipper and the Little Dipper (aka ursa major and ursa minor) and lots of other constellations that someone had to explain so that we could "see" the figure - the king and queen (Cassiopeia and Cepheus), Sagittarius and Scorpio, the swan and the lyre.  I remember talk about being able to see the aurora borealis on occasion - a shimmering of psychedelic colors - and think I remember seeing that once.  And of course, we saw satellites, too, which were new; we called them all Sputniks as we watched them move purposefully across the dark expanse above.

And in the late summer were the meteor showers.  Before the time when we all began to stay inside watching television in the air conditioned house, summer nights were spent outside.  The house was hot inside, especially after dinner preparations had heated up the kitchen, and we often sat outside on the porch or in lawn chairs with cold drinks in condensation-slick colored metal cups or invited neighbors over for chilled watermelon or, best of all, to make homemade ice cream in a wooden churn with rock salt in the bottom of it.

Fireflies and treefrogs provided background noise as we children played tag or "ain't no bears out tonight" while the adults sat in the dark, smoking and murmuring among themselves about the boring things adults murmur about.  And occasionally, someone would gasp or let out a little shout, and we'd all look up in the sky to see a long white-gold or orangey streak, a shooting star. The brainy scientist kid from next door (the one who became a doctor) would correct us, announcing that it was a meteor, but I much preferred the term shooting star.  A star that suddenly takes off on a wild ride across the night sky, trailing a glittering streak of celestial ash - that's magic.  "Meteor" is cold, rocky, science-y.  Those nights under the stars of every kind (as well as the mysterious Sputnik beeping its way overhead with its spy cameras clicking) were magic, through and through.

I will look up tomorrow night, I'm sure, in hopes of catching a glimpse one of those streaks over the skyline. And I will most likely look up in vain. But I'll know they're up there, those stars that break out of their fixed places and just take off, trailing stardust.

Ray Barnes said…
You certainly know how to paint a picture Penny.
What a beautifully descriptive bit of writing!
I could see it as clearly as you did all that time ago.
Thanks for that.
August 12, 2011 at 2:32 AM

Penelopepiscopal said…
Thank you, Ray. It was a long time ago, but these are potent memories, I guess. (Else I am getting to the age where I remember long ago better than five minutes ago!)
August 12, 2011 at 10:55 AM