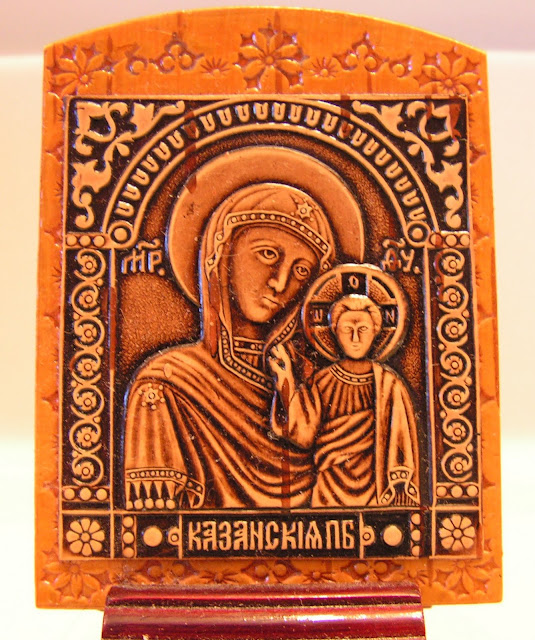 When I was growing up, we didn't make that big of a deal about Mary.  We were Baptists and all that Mary stuff was papist, I was told.  So we had our white ceramic madonnas at Christmas (I still have the one I was given by my choir director in elementary school), but that was about it.  I remember visiting St Peter's in Rome after I graduated from high school and seeing Michaelangelo's pieta there (this one) and although she was not painted, there I saw Mary in a much different light. This was not a serene or placid or blank-faced madonna but a young mother dealing with the unimaginable.  This mother was doing what mothers do - cradling their children - and at the same time asking "why" with her palm upraised.  If a bewildered Mary asked Gabariel at the annunciation, "How can this be?" then she was asking the same of God here.

When I became an Episcopalian, I met many people who were devoted to Mary; the Anglo-Catholic parish where I served as a deacon had a large statue of her in the back of the nave and we said the Angelus (Hail, Mary....) at the end of every service.  Others, primarily women, felt that Mary gave them what was missing in their (as they perceived it) all-male Bible and church tradition.  Mary offered a place for women in the story to these women, most or all of whom were mothers.

I myself became drawn to Mary when I was pregnant with my first child.  I, too, had a place in the story, a special place.  Mary offered me a new way of seeing the story and a new way of experiencing faith that was tied up inextricably with the messiness of life.  I had things to ponder in my heart, too, although I was never one to keep everything to myself.

Now I see that indeed women - many women, not only Mary the Mother of God - are all over the Bible and our tradition.  They figure in so many of the stories - in some they are just there with everyone else, and in others they are key.

But many women I know were taught about the Bible from people who glossed over the women and their everyday and pivotal roles.  They were taught by people who told them that Mary Magdalene was a prostitute and that Martha was the silly and inferior sister whose sphere was limited to cooking and cleaning (and that oh by the way such was their sphere, too) and that if it weren't for Eve, sin would never have entered the world.  They were told that women could never be anything because it said so in the Bible - that they were inferior, sinners, hapless, unfit.

All sorts of traditions have grown up about Mary, including stories about her later life, her parentage and early life, her assumption into heaven.  The Bible itself is rather quiet about all of that.

But it is not quiet about this: Hail, Mary, full of grace, the Lord is with thee.  Blessed art thou among women.

Charles Kinnaird said…
I, too, grew up Baptist and there was little mention of Mary except at Christmas. For me it was Carl Jung who opened up a window of consideration to give honor to Mary. Today, praying the rosary is one of my most treasured devotional practices. I posted on my blog today an essay, "A Jungian Appreciation of Mary."
August 15, 2011 at 10:18 AM

Penelopepiscopal said…
Thanks Charles - liked your post a lot. You are right about the feminization of Jesus seeming necessary to restore a sense of completeness to the idea of God.

Interestingly, when my uber-Baptist grandmother died, we found a rosary in her jewelry box. The whole family was floored. (I kept the rosary.)
August 15, 2011 at 10:48 AM

Brenda said…
Ah yes, growing up Baptist will mess up a healthy view of Mary. And a bunch of other things. Ahem.

I still disagree theologically with those who insist on worshiping Mary, but the Episcopal tradition has certainly increased my appreciation for her.

I love her humanity, willingness, and special place in the gospel story.

Kay Guest said…
Hail Mary, Full of Grace,
The Lord is with thee,
Blessed Art thou amongst women
and blessed is the fruit of thy womb, Jesus.
Holy Mary, Mother of God, Pray for us sinners now and at the hour of our death. Amen.

Not too many things I know by heart except for this! I know that many people believe that Roman Catholics worship Mary, but they are not really supposed to. Rather, and you may correct me if I am wrong, but they believe that since she is the mother of GOD, then it would follow that she might hold a special place in heaven, and you might ask her to PRAY for you. Seems logical to me.
Kay
August 15, 2011 at 4:51 PM

Penelopepiscopal said…
Brenda and Kay, yes, one of the "bad things about Catholics" we Baptists always heard was that they prayed to Mary. But Kay is right that asking her to intercede and pray for us is what the practice was supposed to be. (For that matter, asking the saints to intercede or to pray for the dead was in the same vein. Sort of like talking to Grandma in heaven and asking her to watch over someone.) Ditto things like venerating the cross or the altar . Then you've got icons... Venerating something is not the same as praying to it, as venerating means "regarding/treating with reverence." But these nuances were lost on many of us back in the day. We felt it was better just to stay away from anything that looked like idolatry. Ignoring of course our worship of the market or money or family or country.....
August 15, 2011 at 5:02 PM

Penelopepiscopal said…
Virgil, true. There's a lot of feminine imagery for God in the OT, particularly - wisdom being the primary one but also some mothering imagery both in the Bible (particularly in Isaiah - God who is like a mother who could never forget her children) and from early church "fathers" such as Anselm (who wrote the lovely Jesus our Mother canticle). Much of that got lost, both after Christianity split from Judaism (and the OT was interpreted through the NT lens) after the Reformation when much tradition was cast aside.
August 15, 2011 at 5:14 PM