In the boat or out of the boat? 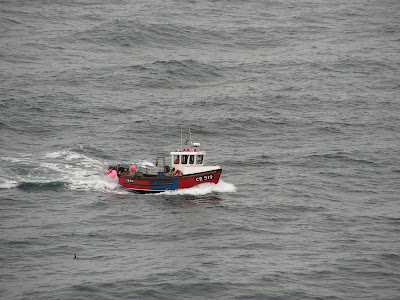 Jesus made the disciples get into the boat and go on ahead to the other side, while he dismissed the crowds. And after he had dismissed the crowds, he went up the mountain by himself to pray. When evening came, he was there alone, but by this time the boat, battered by the waves, was far from the land, for the wind was against them. And early in the morning he came walking toward them on the sea. But when the disciples saw him walking on the sea, they were terrified, saying, "It is a ghost!" And they cried out in fear. But immediately Jesus spoke to them and said, "Take heart, it is I; do not be afraid."
Peter answered him, "Lord, if it is you, command me to come to you on the water." He said, "Come." So Peter got out of the boat, started walking on the water, and came toward Jesus. But when he noticed the strong wind, he became frightened, and beginning to sink, he cried out, "Lord, save me!" Jesus immediately reached out his hand and caught him, saying to him, "You of little faith, why did you doubt?" When they got into the boat, the wind ceased. And those in the boat worshiped him, saying, "Truly you are the Son of God."


We had an interesting discussion in one of my seminary classes about this passage.  This was an ethics class, not Biblical studies, and in that class we frequently went off on tangents.  I'm pretty sure the discussion was one of those tangents.

I was one of the "out of the boat" people, based primarily on a sermon I'd heard a few years before about how the place in church where we sit is called a "nave," which comes from the Latin word "navis," meaning boat.  The preacher pointed out that the ceiling of the nave in a Gothic style church looks like the bottom of a boat, only it's upside down.  Symbolically, then, it's as if we're being poured out of the boat.

And because I'm someone who believes that being a Christian is more than going to church, that Christians are to minister in the world (that's what the priesthood of all believers means), this idea resonated with me.  We're not supposed to stay in the boat, but get out and trust that God will take care of us, to not be afraid when things get a little rough.  Others who were in the "out of the boat" camp tended to be oriented toward social justice and evangelism.

On the other hand, the Biblical studies folks talked about the particularities of Matthew's Gospel (Peter's getting out of the boat is unique to Matthew) - about Matthew's concern for the nascent church, represented as a boat, trying to navigate chaos (the sea always represents chaos in the ancient world) and that those in the boat should have faith that it is God's word that will come to them in the boat going through the chaos.  That the people should stick together in the boat knowing that Jesus will come to them in hard times - and that they shouldn't challenge Jesus as Peter seemed to be doing.  These folks believed that Jesus wants us to stay in the boat.

Finally, a third group mentioned that this is the kind of passage that can make people feel guilty and inadequate because of the "not enough faith" aspect.  They reminded us that people feel guilty when they pray for a loved one who is ill but that loved one dies, and they think they didn't pray hard enough or the right way.  Similarly, in this passage, would people feel that they needed to have faith beyond their capacity during a crisis?  They also felt that Jesus didn't want us out of the boat.

It was a fun discussion.  I came away still feeling that we should get out of the boat, but with new curiosity about what Matthew himself was writing about and an appreciation for other points of view.  What do you think?  Are you in the "in the boat" or "out of the boat" group?

I think I am 'out of the boat' too, since it seems to demand absolute unshakeable faith.

In a real situation I don't know whether I would have enough faith to obey the instruction.

Penelopepiscopal said…
Thanks, Ray. I continue to revisit this idea from time to time, and always end up in the same place about getting out of the boat.
August 7, 2011 at 3:47 PM

Dom said…
I'm a great believer in social justice. So I'd have to say that I'm an 'out of the boat' person as well. Although going out of the boat is certainly scary.
August 7, 2011 at 6:21 PM

Anonymous said…
I went with staying in the boat, http://bit.ly/pNbOr5, though I do not think it is either staying in or getting out. It is both/and. Reading the two together gives us a more complete understanding of the story.

Penelopepiscopal said…
Thanks, Mike. I agree, both options give us plenty to consider.
August 9, 2011 at 7:27 AM