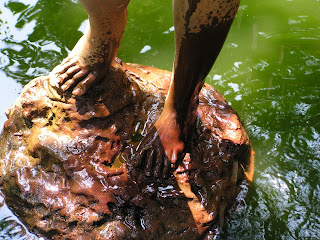 Recently, I read the highly acclaimed, New York Times bestselling, National Book Award winning nonfiction book/memoir Just Kids, by Patti Smith.  Ostensibly about her long and often shifting but always devoted relationship with the artist and photographer Robert Mapplethorpe, whom she met when they were both twenty-one and homeless in New York, the book is also a portrait of bohemian life in lower Manhattan during a period of explosive social change and upheaval - 1967 - 1978.

There are plenty of great book reviews of Just Kids in the New York Times, Guardian, etc. that you an access online if you're interested.  Most reviewers consider the book to be beautifully written; Smith always considered herself first a poet and certainly is uncommonly well-read.  I think there may have been some editing problems, though, as occasionally something would seemingly appear from nowhere (for example, she mentioned a beloved clarinet about three quarters through the book which was never mentioned before or after).  Sometimes the prose was overwrought.  And the way she glossed over events or periods she considered important in her own development while lingering over details in Mapplethorpe's was sometimes frustrating to me, but then again, she wrote the book because she promised Mapplethorpe as he was in the last stages of AIDS that she would tell his story.

In the end, though, what impressed me the most was neither Smith nor Mapplethorpe's own particular stories but the story of this almost fairy-tale era when artists and musicians and poets/playwrights/writers and hangers-on and power-brokers/patrons and junkies and geniuses all mingled together in Manhattan feeding and collaborating and influencing one another.  It was a time that seems like great big swirl of exploration and discovery that has always had an aura of mystery and other-worldliness about it, and since Smith (unlike many) was sober for pretty much all of it, her portrait of that time and that other-world is extraordinarily lucid considering that she herself is known for her groundbreaking smashup of spoken words and guitars mimicking car crashes and avant-gard visual art shows.  She never romanticizes that time, she just invites us to experience it through her vignettes, generously bringing us into this swirl and showing us a world in which people are willing to devote themselves entirely to their (and sometimes others') artistic development.

Smith landed in Manhattan at 20 with no money and no place to live; she slept in doorways and in parks until she and Mapplethorpe joined forces to scavenge food and trespass in friends' vacant apartments.  They casually formed alliances and bonds with others in the arts community - so many people were just drifting in and out of each other's orbits.  Once they found more stable housing and Smith found work, they lived just one step ahead of poverty - she describes their trips to Coney Island where they could only afford one hot dog from Nathan's (she got the kraut, he got the dog) or the times they didn't have the extra ten cents for chocolate milk.  They had very few possessions, and most of them were scavenged on night-time trash sifting walks through the neighborhood.  They spent all of their time that was not devoted to finding food or making money (Smith working at Brentano's, Mapplethorpe hustling) doing art.  Writing, drawing, assembling.  They moved from place to place, often finding "free" space that was uninhabitable until they (mostly Mapplethorpe) transformed it into a work of art itself.  Even as they uncoupled as Mapplethorpe began to understand his sexuality, they pledged themselves to each other, to help anchor each other during that swirling time.  She had an additional anchor, her faith, which plays only a very bit part in the book and yet its influence comes through loud and clear.

Their way of living (even with the frequent moving) so intentionally and simply and deeply struck me, particularly in contrast to our very distracted way of living now.  For instance, while we have millions of songs available to us via iTunes or Rhapsody or Pandora without much thought, Smith played the same Bob Dylan album over and over and carried her collection of a few vinyl LPs with her from place to place.  She had a few books about art and poetry that she went back to again and again.  These influences were beacons to her throughout her life.

The devotion to art and rolling it out often unfinished (weeks spent making something that would just be a fragment of an idea performed in someone's apartment for five friends sounds like what my kids would do as pre-schoolers) while living on scavenged celery and pita bread in an apartment furnished with a bed and a desk and a naked light bulb in the ceiling and a bathroom down the hall..... that kind of life seems a world away, now.  But many of us see that time in American history as incredibly fertile as well as socially chaotic.  The people in that world were formed by their experiences (as we all are) and the book allows us to see the intricacies of formation and experimentation and the role of influences that come about almost accidentally.  Someone enters the picture and changes the way the artist works with a word or an introduction to someone else (such as Smith's short but pivotal collaboration with Sam Shepherd) or with a gift (particularly, in Mapplethorpe's case, the gift of a Polaroid camera).  What often looked like aimless drifting was still intense formation; they were gathering all these pieces from here and there and everywhere (as perhaps symbolized by all the scavenging) that would then show up in the art and music that they produced.

This is true for many artists.  But in Just Kids, we get to see how it worked for these two particular artists back when they were, truly, just kids.

Dreaming Beneath the Spires said…
Excellent review
"What often looked like aimless drifting was still intense formation; they were gathering all these pieces that would then show up in the art and music that they produced." That's an encouraging thought as one looks back on all the fallow, apparently wasted hours in any life, particularly perhaps a woman's. I enjoyed the review. I know Mapplethorpe's work, but had not heard of Patti Smith.
Anita
June 9, 2011 at 4:29 PM

Penelopepiscopal said…
Thanks, Anita. Patti Smith is a Rock and Roll Hall of Famer now; her most well known song is Because the Night which she wrote with Bruce Springsteen.
June 9, 2011 at 4:59 PM