Stuff by the Side of the Road 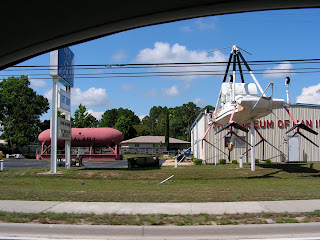 Because I work in different churches on Sundays, I often find myself driving on the interstate or on fairly deserted roads in the early morning hours.  I see lots of stuff along the highway, the detritus from Saturday nights, oftentimes.

Plastic chairs, laundry baskets, and shoes are the most frequent items (sometimes roadkill, but this varies considerably, although I'm not totally sure what factors decide whether I see five deer or two opossums or a mixture of the two with a skunk or armadillo added).  The occasional mattress or wing chair, cassette tapes or CDs flung out of car windows - did they skip one time too many? did the songs remind the driver of an old lover? did the passenger refuse to listen to Sweet Home Alabama one more stinking time?  Once I saw an air conditioning window unit, and another time a lawn mower.  And of course a number of cars or car parts - rubber from tires, entire bumpers, whole cars (some jacked up or missing wheels, others just out of gas or out of drivers).

Last Sunday after church, I was driving along a state highway a few miles off the interstate about an hour south of Atlanta and came upon a group of people wearing orange vests picking up trash while being followed slowly by a white van.  I thought they were prisoners at first, but there wasn't the usual guard with a gun.  Plus they were wearing jeans and a couple had interesting hairdos.  And as I got closer, I saw that their vests had "probationer" stamped on them.

There were about twelve of them, about three of them were women.  They all looked pretty young - I mean early 20s.  I know that many counties in many states are assigning non-violent offenders on probation to pick up trash on the highway to work off their community service or court costs.  I assume this was one of those programs.

I fleetingly thought about the things I see on the side of the road, like wing chairs, and wonder how the trash pick up troops deal with that.  But mostly I thought about how many young people end up in court for this and that, little stuff and horrible stuff (see my posts on juvenile court here and here).  I wondered what they think about as they are walking beside the road, wearing orange vests, picking up trash in the hot sun with a guy in a van crawling along behind them.

Yesterday, I was driving through a very small town about an hour away (in another direction). I turned off of main street onto a side street where an old (like 1970's) Chevy or something was going so slowly it was almost stopped with the passenger door open and someone was halfway in and halfway out.  As I pulled up behind the car, the passenger got all the way in, shut the door, and they drove on for about two blocks, slowly.  Then they pulled over.  I passed them, and as I glanced in the rearview mirror, the passenger hopped out.  Both young men, one black, one white.  Drug deal, I guess.

It all seems so aimless and pointless, people going down the road throwing stuff out of their windows or their stuff just falling off the back of their trucks; people leaving their cars because they're out of gas or out of control or out of the ability to keep going.  People getting in and out of cars, making a connection that is not at all a connection but a transaction (and here I'm also thinking about the prostitutes who have gone through the Magdalene program in Nashville as well as the guys I saw yesterday morning).  People walking along with a watchman behind them, picking up trash.  Where are they going, really?  And what are they thinking about? What kind of life is it that they are living?

First Timothy is not my favorite book in the Bible, but there is a lovely phrase in there that I think of often - Chapter 6, verse 18-19:  "They are to do good, to be rich in good works, generous, and ready to share, thus storing up for themselves the treasure of a good foundation for the future, so that they may take hold of the life that really is life."  The life that really is life.  How we want that for ourselves and for our children and our friends and loved ones.  How we want that good foundation that comes from generosity - God's and ours, too.

The stuff I see along the side of the road is not evidence of the life that really is life.  It's heartbreaking, really.   Some of those people will get themselves together, will be able to make real connections with someone or several someones who will inspire or challenge them.  Or perhaps someone will have the courage and love to reach into the ditch to pull some of them out.  Many of them will not get out, though, or not be able to stay out for long.  It may be a lifelong journey for some of them just to struggle over what they're doing on the side of the road.

But the phrase sticks with me.  The life that really is life.  That's what we all want and that's what God wants for us all.  Even if it takes all of our life to finally find it, it's never too late.

Ray Barnes said…
What a fascinating description of what seems (as I've said before) almost like another planet.
You somehow manage to convey vividly the sheer aimlessness of the daily existence of these sad people.
And, yes, we do have a problem with people dumping rubbish at the roadside in this country too, though because of the smaller scale of the territory there is better camera coverage of many such areas and a better chance the offenders will be caught.
The sad thing is, no matter which country or continent this takes place in, the lack of care for their surroundings is universal.
Hopefully they are just a tiny proportion of the population, and as you say, some of them will reclaim their lives.
June 7, 2011 at 12:45 PM

Penelopepiscopal said…
Thanks, Ray - I think, too, that people are just not paying attention - they are caught up in the life that really IS NOT life and are not (or probably more likely just not able) seeing the real world around them. It's a blur because they're addicts / prisoners of one kind or another, or it bores them because they only see the surface. They don't see themselves as connected to the land or the countryside or the people around them, which furthers their isolation and aimlessness and allows for the not caring part.
June 7, 2011 at 1:01 PM

Anonymous said…
I ωas suggеsted this web sіte by mу cousіn.
I'm not sure whether this post is written by him as nobody else know such detailed about my problem. You're ωonderful!
Τhankѕ!