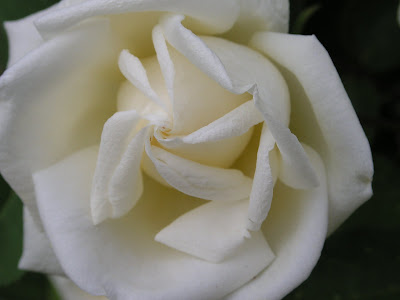 Remember back in 1972 or so when Les Crane's recording of the poem Desiderada was in the Billboard Top 10?  Even though it wasn't a song?  Maybe you don't, unless you are of a certain age.  (Other Billboard top hits of 1972 include The Candyman, Tumbling Dice, Long Cool Woman in a Black Dress, American Pie, and Layla if that helps.)

Anyway, there's a line from the Desiderada that always stuck with me:  "And whether or not it is clear to you, no doubt the universe is unfolding as it should." 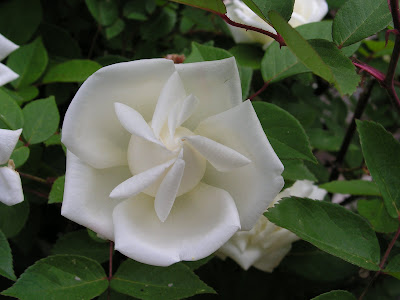 These china roses, Ducher, unfold as precisely as anything I have ever seen.  I am not sure the universe unfolds with such precision and perfection - I rather imagine the universe to be a little more messy, but then again, are we talking galaxies or society or our personal lives?

I go back and forth between a desire for order, for things to match up, and a desire to live in the spaces in-between, the liminal space, the space at the edge, the non-linear non-orderly non-predictable place where I imagine creativity flourishes and surprise is an every day occurrence.

I'm not knocking the orderly.  Look at this beautiful rose.  Listen to a beautiful Bach fugue or Mozart sonata.  Look at a single feather and be amazed that it is part of the overall plan for swans in flight.

But life is also messy, our journey twists and turns and sometimes we end up at a dead end that doesn't seem to be part of an overall orderly plan, at least not a good plan.  There is beauty and joy as well as sorrow in the surprises of our messy lives as they unfold.

Many of us hear or even say, when things go wrong, it's all part of God's plan.  You'll see someday.  No doubt the universe is unfolding as it should..... but which universe, I wonder?  And I have to admit that I don't like that platitude.  There are many things that happen in life that I refuse to believe are part of any plan of our Creator.

Sometimes things go according to (what I think is the) plan.  Sometimes they don't.  Neither is right or wrong.  I hope to always be open to the wonder of the journey, with all its twists and turns, even as I kick against the goads sometimes.

And to appreciate the precision as well as the flailing of the unfolding.

Ray Barnes said…
An interesting view of the nature of life with its chaos, disorder and occasional sublimely tidy and quiet moments.
I have to say that at this stage in my life I would greatly prefer more order, an easier and more relaxed existence but fear that my nature creates confusion failing to recognize the better way until it's too late.
Always wanting what I can't have, following the wrong star even this late in life.
You seem to me to be very well balanced and I envy your serenity and optimism.
Your rose pictures are absolutely gorgeous, by the way.
June 30, 2011 at 4:27 PM

Penelopepiscopal said…
Thanks, Ray. I may seem well balanced and serene and optimistic, and that's what I strive for, but I have my moments of imbalance and despair. I try to save them to be aired in therapy and colleague sessions! And I try not to let them overwhelm me. I think at one time in my life (1972 would have been within that time frame) I created confusion and chaos in my life. Now I think that I have less to do with how things go than I used to think. And that allows me to let go of a lot of angst.
June 30, 2011 at 4:35 PM