Ode to the Book of Common Prayer 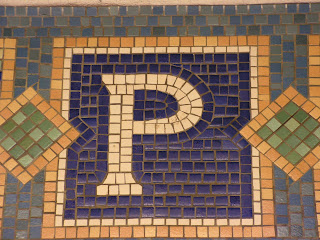 One thing I really like about the 1979 BCP is that it is so flexible.  We have options... Collects for nearly every situation or occasion, several different Eucharistic prayers, the ability to use alternative liturgies and prayers.  It's got the Easter Vigil in all its glory as well as two forms of reconciliation.  And of course, the beautiful Burial Rite.

When I was in seminary, there was a lot of talk about the prayer book.  I went to seminary with folks from several different denominations; the Episcopalian/Anglicans were the second or third largest group, behind the Methodists and either Baptists or non-denominational folks, I think.  Sometimes seminary chapel was an Episcopal service, and sometimes it was another type service.  We did Episcopal Morning Prayer and Evensong, too. We had our Episcopal-specific classes (including one on the Prayer Book) but took the core classes (OT, NT, ethics, systematic theology, etc.) with everybody.

The talk about our prayer book went in two directions.  First, many students from other denominations secretly (or not so secretly in some cases) loved our services and loved the BCP.  Certain students were fixtures at Evensong; we called them our Anglo-Baptist (or whatever) friends.  We Episcopal students were often asked to have lunch or coffee with a Methodist, Baptist, or Presbyterian classmate who wanted information about Evensong, about where to buy a BCP, about incense.  The Methodist students (who were in the majority at our seminary) were always amazed at how quickly we could plan a service, because we just used the BCP whereas some of them were trying to reinvent the wheel.  During my summer hospital chaplaincy, the BCP was in big demand by other (non Episcopal) chaplains - those beautiful prayers for the sick and dying seemed just right.

The other talk was tinged with disdain - these were just written prayers that people read, and where was the Holy Spirit in that?

That always bothered me.  I love the BCP, and to me, praying prayers that have been being prayed by faithful people for centuries is part of why I love The Episcopal Church.  Being part of that stream of tradition that stretches back to the earliest days of the church is something I particularly cherish.  Those prayers were not only Spirit-inspired when they were written but have been Spirit-infused as people have prayed them over and over again.  I have nothing against extemporaneous prayer, but to suggest that there is a qualitative difference between the types of prayers we pray is not only silly, it's untrue.

The other thing about the Prayer Book is that through it we come to understand that all of our worship is prayer.  We may have certain times in our services for litanies or particular prayers, but Morning Prayer is all prayer, not just the time for intercessions.  (This was another seminary topic - why did we only five five minutes for prayer during Morning Prayer, some people asked?  And so we were given the opportunity to explain that all of it is prayer.....)

I have several prayer books now.  The one I got when I was confirmed has a lot of writing in it, as I used it during my BCP class and pencilled in manual gestures to use in my liturgy classes.  I have a small, very soft leather bound one that fits into my traveling communion kit.  I have a combination Bible and BCP (great for Morning Prayer) as well as a combination BCP and 1982 Hymnal (great to use on Sunday mornings and Evensong).  I do also have an English Prayer Book; I have friends who have some very old ones that were passed down through their families.

And I have a BCP loaded onto my iPad and iPod now - great for travel.  Tradition meets technology.  I guess you can say my iPad is a combination BCP/sermon collection, as I preach from the iPad now, too.

How about you?  What's your favorite thing about your prayer book?

Ruth said…
Do you have a link for combined Prayer book and bible? What a genius idea.

I'm rather partial to the service of Compline in our 1929 Prayer book but I'm afraid the rest of it is too fuddy duddy for my modern and inclusive tastes!
June 13, 2011 at 7:11 AM

Penelopepiscopal said…
Ruth, here it is at Amazon.

Jim Liberatore said…
Mine is a memory growing up. My mom had three books by her side at all times. A novel, The NY Mets yearbook and the BCP. She taught me early on to mark all the pages we would go to during the service. Oh, an never to let my fanny rest on the pew when I was kneeling!)
June 13, 2011 at 9:09 AM

Penelopepiscopal said…
Neat, Jim. That "marking the pages" practice no doubt came in handy for the priesthood!
June 13, 2011 at 9:18 AM

Perpetua said…
Another BCP lover here. I was brought up Congregationalist, but confirmed as an Anglican when I came to adult faith, at least partly because I so love liturgical worship. Prayers that have been prayed down the centuries have a resonance that speaks to something deep inside me, whether they are written in traditional or modern language.
June 13, 2011 at 10:16 AM

Angela said…
I also love Burial - chose it as my thesis topic b/c I think it's the most beautiful liturgy we do. Also love Compline.

I was one of those Anglo-Baptists who was seduced by incense and chant at Sung Eucharist. My catechesis was singing the Trisagion and practicing making the sign of the cross as I drove around Atlanta.

Last year at Canterbury for the daily office we used _Common Worship_ the C of E's 2000 prayer book. Excellent. They also have a good funeral service - lots of variations and it's very stational - even has prayers for at home after the funeral. Worth taking a look at.
June 13, 2011 at 11:21 AM

June Butler said…
Another lover of the BCP here. I like that the Prayer Book includes a prayer for nearly every occasion. When I post prayer requests on my blog, I often use prayers from the prayer book in the event people who read the needs wish to pray right at the moment.

I love the burial service, too. I treasure the entire book. Sometimes before communion, I read the Prayer for Humble Access on my own. A good many folks don't like the prayer, but I do.
June 13, 2011 at 2:18 PM

Penelopepiscopal said…
Yes, Angela was one of our Converts in seminary! Thanks for the Common Worship recommendation, Angela.

Mimi, I know why people love the Prayer of Humble Access, even though I don't generally favor using it at the Eucharist. And the reason why is that, particularly if you start out with the Penitential Rite, and then you have the confession, and then the Rite I Eucharistic Prayer says although we are not worthy etc. It feels as is there is way more focus on our unworthiness to use the Humble prayer on top of those others. But it is true and I know it means a lot to many people.
June 13, 2011 at 4:52 PM

Ruth said…
Don't forget that the CofE's Common Worship is available to download free on their website, as as all the Scottish Episcopal Church's liturgies.
June 15, 2011 at 10:20 AM

Grandmère Mimi said…
Penny, I'm quite happy to pray the Prayer of Humble Access quietly on my own. It doesn't work for a good many people, and I understand why, but it works for me.
June 15, 2011 at 4:32 PM

Penelopepiscopal said…
Hi Mike - thanks for the comment - but I'm not sure what you are asking. Communion and Eucharist are the same thing. The official line of the church is that only baptised folks should receive communion, but there is more and more debate about that these days. Some people feel that they don't want The Episcopal Church to deny anyone communion and that all should be welcomed at God's table. That practice is called open communion or open table. I don't really want to debate that here in this post, but it's a question worth considering from all sides.

Mimi, I think that many of us have our own prayers and postures and other things we like that work for us. Thanks be to God that we can say our own prayers, too!
June 15, 2011 at 6:40 PM