A sermon about witness and restoration 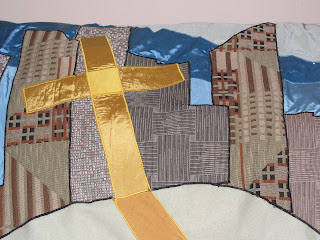 (Texts for the Seventh Sunday of Easter here.)

So, the first thing the disciples ask Jesus in the book of Acts, after they have been with him during his ministry, after they have witnessed his death, and experienced his post-resurrection appearances, is this:

So, NOW are you going to restore the Kingdom of Israel?

This may strike us as ridiculous, but it’s really understandable.  They were good Jews.  And all good Jews knew that the way to tell if someone is the Messiah is if he restores the Kingdom of Israel.  That was the Hebrew Bible’s job description of “Messiah.”  So Jesus had died and been resurrected, which was pretty neat and certainly unexpected, but there was still that question about the restoration of Israel.  The disciples probably knew that they were running out of time.  They had been through a lot, following Jesus, and perhaps felt they needed this thing to get back on track.

But in response, Jesus began to reframe the whole story for them.  He said there will be a restoration, but it’s not what they think it is, and it’s not going to happen on their, or anyone else’s, timetable. (Tell this to those people who insist on predicting the time and details about end of the world.)

Notice he doesn’t ask them if this is ok with them.  This is a scene of commissioning. The restoration is going to come through them, and it’s going to be about a lot more than Israel.

And then he disappears from their sight, ascending into heaven, as we affirm in the Creed, even though of course this is a theological claim and not a lesson in physics or rocket science.  The ascension means that Jesus went back to God and took his place at God’s right hand, bringing his - and thus our - humanity right into God’s presence.

So what do the disciples do?  They stand there watching him go up into the sky.  At least, that’s what they did until the angels called them on this response and told them to get on with it.

And then what did they do?  They went and shut themselves up into an upper room, praying a lot.  The author of Acts doesn’t tell us exactly what they were praying about, but I hope they were praying for guidance as they got ready to go out into the world - to the ends of the earth! - as witnesses.  But I worry, because this is the same thing the disciples did after Jesus’ death - they went and shut themselves up in a room until Jesus came and got them out.

Is this Christian witness?  To go into a room and wait for something?  What is it they are waiting for?  Inspiration? (Yes - the giving of the Holy Spirit is the next installment in our story, so be here next week for that.)

But they also were shutting themselves up out of fear, or embarrassment.  Jesus’ death was really a stumbling block for many people and the disciples were certainly not the only ones saying, “Hey, the Messiah is supposed to come and restore Israel.  Jesus hasn’t done that.  Is he going to?  Or is he just another one of those failed Messiahs?”

And so they went up into that room and prayed a lot.

I’ve been there, have you?  When things change suddenly, when I suffer a loss, when I don’t know what’s going to happen in the future - when I can’t even imagine the future or even if there is going to be a future - I think going into my room and devoting some time to prayer is a fine response.

The problem comes when we stay up there.  When we’re too busy with our own concerns and fears and keep ourselves to ourselves.  When we, who are now the body of Christ, as Jesus has long been gone from this earth, do not go to the ends of the earth in witness, but just keep hanging out in our own space instead.

Maybe we are busy making our own space nice, hoping people will come and visit us there.  But our own space is not where Jesus calls us to stay.  We come together here, we pray, sing and read the Scriptures together, we learn together.  Our own space is one of the locations in which we are equipped to go out and be the Body of Christ in the world.  It’s our home base.

But we aren’t going to be able to go out to the ends of the earth as witnesses to what God has done through Jesus the Messiah if we stay shut up in our rooms or our churches.

I have it on good authority that many of you here at St. George’s are involved in various community outreach programs, from the food pantry to the soup kitchen to the health clinic and more.  That’s one of the best ways that we get out of our rooms and into God’s world that is filled with people who are hungry and hurting and needing God’s care through people who have been commissioned by Jesus to be his Body in the World.

There are other ways we get out of our rooms, too, including being willing to identify ourselves as Christians at work and school and in our neighborhoods.  By affirmatively trying to live out the Gospel in our every day lives.  Another is having a presence both personally and corporately online through websites, blogs, and social media - talk about the ends of the earth.  Did you know that even the Amish have been publishing their newspaper online?

When the disciples stood there looking up, they were trying to keep their eyes on Jesus, and that’s an admirable thing to do.  But now that Jesus is no longer on this earth, it means we keep our eyes on Jesus in other ways.

It’s not a bad idea to start that process (every day) by praying in our rooms.  And by coming here to pray together.  But we can’t stay in there or in here.  We have to come out and participate in the eternal life that Jesus tells us about in John today.

Wait, did I just introduce a new topic?  Yes, I did, and it’s a big one - Eternal Life.  Because as far as Jesus is concerned, this is what the whole incarnation/crucifixion/resurrection/ascension is about. This is the subject matter of our witness to the ends of the earth.  And of course, it’s the kind of topic that sends us back into our rooms, to try to puzzle it all out.  Because we get it that eternal life is a major topic and we worry about what it is and how we might have it.

But to go directly to the source, Jesus says right here in the Gospel of John:  This is eternal life: that we all might know God and know that God sent Jesus to bring us all life abundant.  That we might know that God loves us and that we belong to God.  No matter who we are.  Eternal life is neither rocket science nor something “up there” or “out there” or something that kicks in after we are dead.  Jesus tells us right here today: it’s about knowing God and knowing that we belong to God.

And when we know that we are loved by and belong to God, we can let go of so much of that other stuff, the stuff we sit in our rooms worrying about.  We can be loving and generous - which is witnessing to the Gospel - to others.

We can start by, instead of looking up, looking out to see Jesus in every one that we meet, and especially people who are poor and people who are suffering and people who are marginalized in all sorts of ways.  People right here in our community as well as people halfway across the world whom we have become aware of through charities‘ publicity and news stories.  And we can come out and be Christians among them, daring to be in relationship with them, to touch them, to stand up for them, especially when they don’t seem to have anybody else standing up for them.  To bring about the restoration not of Israel but of God’s people who have been forgotten, or worse, who have been pushed aside.

It is our task to help restore them - to restore them to love, to relationship, to acceptance.  To restore their dignity, their well-being, their place in the kingdom.  To act out of our own abundance for the benefit of those who lack all sorts of necessary things, from food and shelter and health to love and acceptance and friendship.

We are known and loved by God; Jesus came to show us that we belong to God; this is eternal life. And he commissioned us and gave us the power to take over where he left off. So now let us go out and love - touch, feed, care for, defend - others in witness to that good news.

Suem said…
"When the disciples stood there looking up, they were trying to keep their eyes on Jesus, and that’s an admirable thing to do. But now that Jesus is no longer on this earth, it means we keep our eyes on Jesus in other ways."

I particularly like this idea. Have to say that I always find the meaning of the Ascension quite hard to understand. I like the way this looks at that period between Ascension and Pentecost, and the way you relate it to our lives.
June 5, 2011 at 5:28 PM

Penelopepiscopal said…
Thanks, Sue - glad you found this helpful. I think the Ascension is difficult, too. I get it as a theological claim, and that's where I tend to stay with it, that Jesus returns to God, but it's also in a way a commissioning us. Jesus goes away (wherever) so that we will have to take the baton and go on. The disciples and we would otherwise be content to keep letting Jesus do everything while we trailed along behind.
June 5, 2011 at 8:26 PM