Cute but territorial. What a combo. 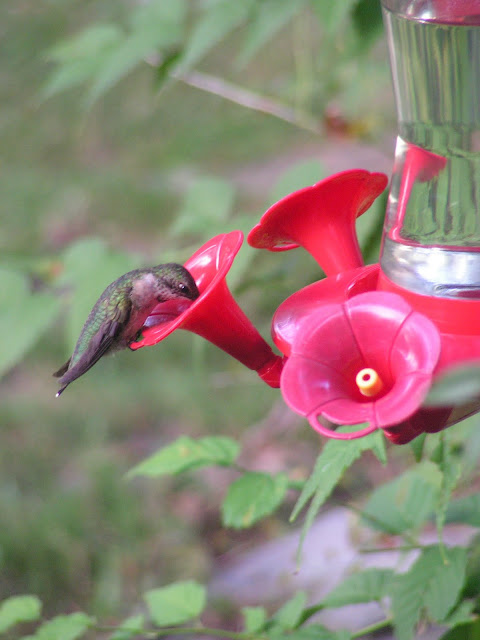 Ruby-throated hummingbirds are transient visitors in Atlanta.  They blow through in April, not really stopping to enjoy the riot of blooming everything but eating and running as they continue north to spend the summer elsewhere.  (My parents' house in NC was a hotbed of summer hummer life.)

They return in August and September for a longer stay, visiting the odd remaining blooms and especially the feeders people put out for them.  This is the time when they tank up for the long trip to Central America, where they will spend the winter.

Each year about this time, someone in our family suddenly notices a dark shape zooming through the yard, smaller than the other birds but larger than a bee.  If I'm out watering the potted plants with the hose, I may get an inquisitive hummer come to check out the sound and maybe fly through the spray for a quick sip and dip.  (They're attracted to running water.)  As soon as one of us spots a hummingbird, I mix up a batch of sugar water and fill the feeder in the back, near my little water feature, which I can watch from the window seat in my den.

Hummingbirds are very territorial.  Even though my feeder has six ports, one bird may guard the whole feeder, flying in from a nearby tree branch to run off any other birds.  A few years ago, this defense was maintained by the alpha bird simply perching on top of the feeder's stand (you know, the ones that look like shepherd's crooks) and daring any other birds to come near. The last two years, I've had an especially territorial male, who has found a perch on a nearby pecan tree branch that gives him a clear view not only of my feeder, but of my neighbor's as well.  He tries, not always successfully, to defend them both.

The antics are hilarious. The bird sits on the branch, sees another bird coming toward my feeder, flies out quickly to head it off, then stops in for a perfunctory sip from my feeder.  The fun starts when he notices a second bird at the neighbor's feeder and heads off in that direction only to have a third bird glide in to my feeder for a quick snack.

I was able to get a few photos from my window-seat perch this week and was saddened to learn that the territorial male this year has been spending all his energy fending off not another male, but a female.  Is chivalry dead?  The poor female (easily identified, as she doesn't have the ruby throat) has to sneak in when the male is busy at the other feeder or otherwise cruising the neighborhood, but as soon as he sees her, he comes zooming back to do his menacing thing and off she goes.

Suddenly he's not as cute as he was.  Oh, yes, the shimmering green back, the gleaming black eye, the shovel-shaped tail, the thumb-print red throat, the long black snout, the standing-up-in-the-air hovering that looks like a cartoon spaceman's movements - all that is still adorable.  But, wow, he's trying to hoard two feeders with ten spouts between them all for himself while this less colorful but no less beautiful and precious female is turned away again and again.  I want to go out there and give him a good talking-to.

I want him to have to attend hummingbird kindergarten where the rules are clear and simple:  Share! There's more than enough for everybody!

Meanwhile, I think I'll get another feeder for the front yard.  I know he can't see clear over the house.

Kathy Kelly said…
Thanks for this fun and informative post! I too ran and got the feeder out and filled it with red syrup last week when we had a little visiter checking out the red stained glass sun catchers in our breakfast room windows. But I haven't seen any birds since. I thought maybe placing the hummer feeder next to the cardinals' feeder had left the little ones afraid of these hierarchical big shot red birds. But you've left me thinking perhaps it's the other way around!
September 1, 2011 at 11:58 AM

Penelopepiscopal said…
Sometimes they find another house they like better, but you can try moving the feeder around...
September 1, 2011 at 12:03 PM

Ray Barnes said…
Oh Penny, I despair of you. Equality for female hummingbirds now. With the best will in the world you can't fix everything!
Lovely picture (and post).

Penelopepiscopal said…
Ray, I think that's a fine excuse for you to visit. We can march on the National Audubon Society or something!

The male is taunting me even as I write this. He comes just to get a sip and then leaves to sit on a shrub just out of camera range, even though the other bird is not in sight (I hope she is visiting the new feeder in the front yard), so that I cannot get his picture.
September 1, 2011 at 2:21 PM

Kay G. said…
Penny,
We have hummingbirds from May until sometime in October. We know we are out of sugar water, one will hover at the sliding glass door looking in at us, as if to say, "Hey guys, come on, it's EMPTY!" Perhaps others may only have them the months that you mention, but we have seen their tiny little nest! They truly are a joy to watch.
September 1, 2011 at 6:24 PM

Penelopepiscopal said…
Kay, you're fortunate. Do you have a large lot? In our urban area, they don't stick around to nest the way they did at my mom's larger place. They would buzz my mom on the porch if the feeder was empty and once one of them was hovering in her face, checking out her bright lipstick, I guess.
September 1, 2011 at 6:56 PM

Anita @ Dreaming Beneath the Spires said…
I remember the excitment and joy of humming coming just outside our window (where we had fixed feeders) when we lived in Williamsburg, Virginia. We had a trumpet vine, which they loved too!
September 2, 2011 at 8:32 AM

An update on the story: I put out a second feeder in the front yard and spent a couple of hours this evening watching the female drink from it and guard it herself. The three birds have zoomed around in the front yard too, now, but only the female seems to get the privilege of drinking out of the front feeder. Nonetheless, all three of them were doing a lot of chattering as they sat on the cable wire above and then in the rose bushes. I was just a few feet away, but they went about their business as if I were not there. There are 3 feeders close together now, so I hope each bird is getting plenty of sugar water!
September 3, 2011 at 8:25 PM