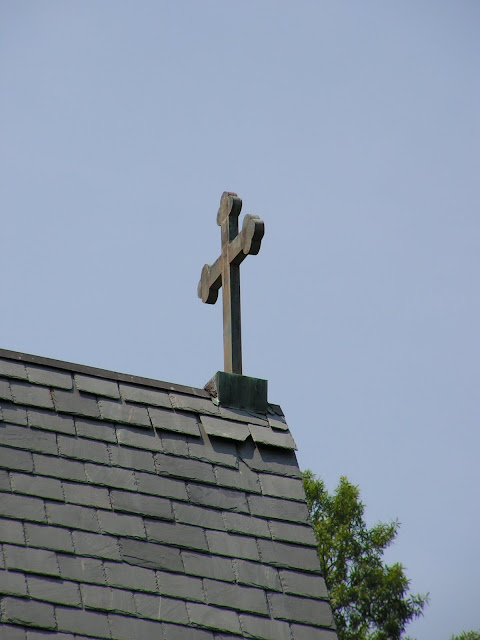 The other day I watched the French movie "Of Gods and Men."

This quiet, powerful, intense and beautiful movie held my attention like few others have in recent memory.  Nearly everyone I know who has seen it says the same.  One knows, very early on, that the monks at the little monastery in Algeria will die.  In nearly every scene, one feels the tension: is this when it will happen? Will it be now? Or now? Or now?  As the story unfolds, the question expands: will their deaths be at the hands of the terrorists or the government?  The monks themselves are living in a super-intensified, almost surreal world. They, too, are constantly wondering. Will it be today? Or today? Tonight? We feel their anxiety and experience it ourselves in every scene.

And yet we also see, after an initial fearful reaction in which several of the monks express the desire to to flee to France and family, that the community does what communities do.  They uphold one another, they give one another strength to do what they might not be able to do alone.  They remind each other of their vows, of their values, of their calling, and they persevere.  They decide, each of them and all of them, to stay - not to abandon their community and the people they serve who do not have the resources to get themselves out of danger as the monks do.  And so they find the rhythm of their days again, prayer, work (planting and harvesting, providing medical services to the indigent community of Muslims around them, selling honey in the marketplace, talking with community leaders), prayer, rest, study, prayer, sleep.  Together.

I suspect the obvious question rolling around in the minds of most people watching the movie is, "Would I have the courage to face a situation like this and to respond as they did?"

But I have to admit, my mind was going in a couple of other directions while I was watching, as well.  One scene in particular stands out.  One of the monks is clearly struggling. He is afraid, he doesn't want to die.  He tells Brother Christian, the abbot of this little eight-person monastery, that he doesn't want to give up his life for this struggle that isn't even his struggle - the civil war in Algeria is simply the backdrop of their lives, not the subject.

But Brother Christian reminds him that he already gave up his life when he took his vows.  He gave up his life to follow Christ, wherever that might lead. This isn't a new decision. It's the same decision, and he's already made it.

Few of us, and as it turns out not even these monks, are thinking of such dire circumstances when we make the decision to call ourselves Christians.  We do not imagine that we might actually be called upon to make such a sacrifice.  And so we don't really know what making a sacrifice means.  We imagine it to be something hard but reasonably manageable.  We imagine that actually, a new wrinkle will call for a new decision.  Oh, yes, I follow Jesus but now that times are getting really tough, I may need to think about it again....

If it was difficult for these men who had taken holy vows of chastity, poverty and obedience, how much more difficult is it for us to accept that truly we were called to give up everything for the sake of the Gospel?  Jesus says that's what we do, but we don't think he means it. He doesn't really mean us.

And often, that's true. Most of us will never have to make that kind of sacrifice. But we don't get to choose ahead of time - we don't get to say, "I'll follow you, Jesus, so long as following you doesn't demand my life."

I'll be thinking about this for a while.

Kay Guest said…
I think I left the comment on the wrong post. OOPS! I meant to say for the Prayer by St. Francis (which everyone should know by heart!)that the first time I knew of it was from a book that I read in 5th grade...it was called Karen by Marie Killilea. Are you aware of this book? It was written by a devout Catholic woman about her daughter with cerebral palsy...she talked about saints as if they were her daily companions.
September 7, 2011 at 9:12 AM

Penelopepiscopal said…
I have not heard of that book - it sounds like a good read. I'll check it out. Thanks!

And yes, we ought to know the St Francis prayer by heart and also try to live it out! So often, I remember too late what I ought to have done.
September 7, 2011 at 10:20 AM

Anita @ Dreaming Beneath the Spires said…
Hi Penny, Lovely review. I so loved it too. I reviewed it a few months ago.
http://dreamingbeneaththespires.blogspot.com/2011/04/of-gods-and-men-sublime-and-beautiful.html
September 9, 2011 at 9:21 AM

Penelopepiscopal said…
Hi Anita - I remember your review! It has been on my "must see" list for a while. (I don't move through my movie list very quickly.)
September 9, 2011 at 10:11 PM