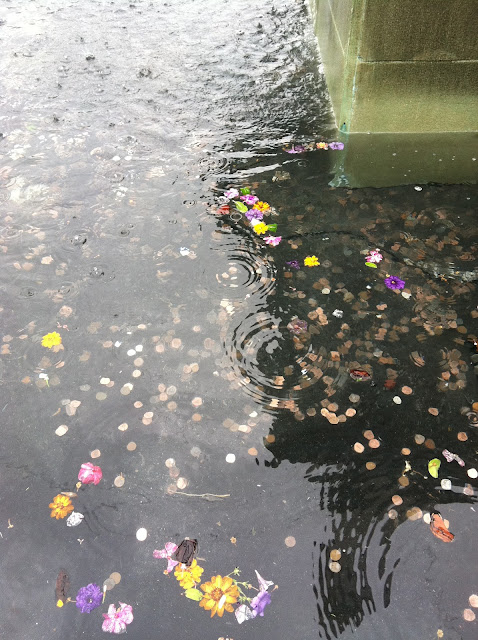 Last night, the State of Georgia executed Troy Davis. I know many people who have been involved in the protests, vigils and other gatherings on Troy's behalf here in Atlanta, including people from my Diocese and people  with whom I went to seminary.  Some of them went to Jackson (the town where the prison is, where the execution took place) last night to keep vigil while others did so here.  I commend their work and their passion.

The Supreme Court delayed Troy's execution for a few hours last night, but in the end, he was denied clemency.  The family of police officer Mark MacPhail say that they have no doubt that Davis was responsible for Officer MacPhail's death and that they are victims, too.  I have no doubt that they are marked forever by the death of their husband/father/brother. And I pray that they find the peace they so desperately must want.

The prosecutor also believes Davis was guilty.  But there were many questions (involving manipulating witnesses mostly) about the original handling of the investigation, seven of the nine witnesses against Troy Davis recanted their testimony, there was no physical evidence to indicate that Davis was the killer, and the Board of Pardons and Paroles was split 3 - 2 about whether to grant clemency.  "Too much doubt" became a catchphrase for this case.  See this article at the New York Times (click here.)  My son went to school this morning wearing a tee-shirt on which he had written Too Much Doubt with a Sharpie.  He doesn't want people to brush this off today.

Some call this execution justice. Others call it revenge. I don't support the death penalty, for many reasons. I don't believe that killing one person for another's death will bring peace, myself. I know reasonable people disagree about this.  But the Letter of James says: mercy trumps justice.  Amen.

As I said on my Facebook status today: I noticed that the ground was wet this morning. Must be angel tears.

I will be away from the blog for a couple of weeks. Morning prayers and photos will be posted daily, but no reflections. See you again soon!

Nancy Wallace said…
The issue surrounding the execution of Troy Davis reminded me of why I can never support the death penalty. Miscarriages of justice do happen. Convictions can be wrong. Once the person convicted is executed it is too late to put things right. That presumably is why so many in the US linger "on death row" for so long while all the appeal processes and stays of execution happen. That in itself seems to me like "cruel and unusual punishment" for the convicted person.
September 22, 2011 at 1:52 PM

Anita said…
Mercy triumphs over justice. What a brilliant motto, and guide for how to live life. From the accounts of the execution, it sounds like God was with Troy Davis at his last hours.
September 26, 2011 at 3:43 AM