Here's Looking at You 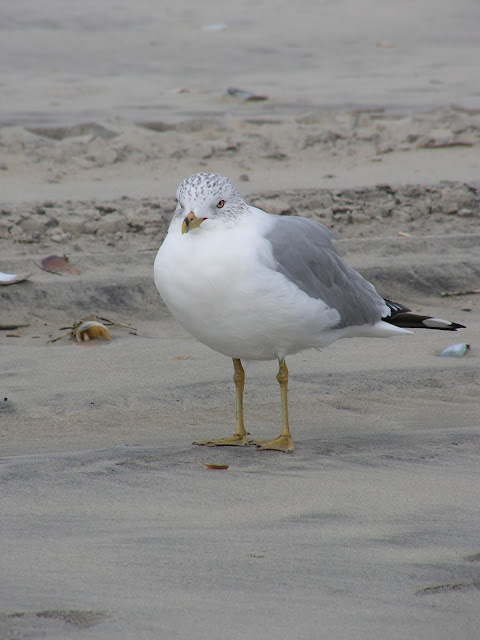 While away on my beach retreat, I decided, after some wrestling with myself, to eat out at a real restaurant.  The kind with nice tablecloths on the tables and shapely wineglasses.  Sometimes eating alone in such a place is intimidating. It's not like eating at Wendy's when you can spend the whole time checking Facebook by phone while you eat.  And it's not the cheapest option.

But after hiking several miles and the prospect of hiking another several the next day, and the trip being a Lenten retreat meaning I wanted to be intentional and thoughtful about all that I did, I realized that I ought to let someone cook me a nice dinner for a change.  And that I ought to enjoy eating it, that I ought to savor it, actually.

I sat next to a window, through which I could see inside an open doorway into a storefront across the street the unmistakable pattern on the ceiling of a disco ball, and some pre-teen types walking into the place.  As I watched, my waitress arrived.  She told me about the specials, took my wine order, and then, hesitating slightly, said that she was watching the scene across the street, too.

It was the middle school dance.  Her only son, an 11 year old with Asperger syndrome, was there.  She wasn't sure how long he would want to stay, given that a major thunderstorm was headed our way.  He would probably want to be at home during that.

I told her that my son was at a music event for the weekend and that I was sorry not to be able to be with him.  She nodded sympathetically.

When she came back with my wine and a lovely loaf of bread, I asked her about home. She lives with her mother with whom the boy stays when she works at night.  During the day she's a teacher at the high school.  We looked out the window together at the shapes moving around inside the storefront.  I couldn't see much dancing going on, but a few heads were clustered in groups around the room while lights flickered overhead.  I remembered middle school dances.

Before I finished my meal, the wind had blown in some heavy rain, and I watched several kids run out to cars where their parents were waiting, arms over their heads in a futile effort to fend off the wet.   My waitress announced that her son had stayed for an hour at the dance, but was at home now.  He said he had a good time and would go to the next dance, but he didn't want to be out during the storm.

I left her a bigger than usual tip.  And was grateful to God that I'd decided to eat a real meal in a real restaurant instead of holing up at some fast-food joint with my phone to keep me company.

When I hear the debates about single parents, about health care benefits, about education and especially about teachers (and how so many of them are so bad), I will remember my waitress and her family.  Our national debates (and our private conversations) are so often about "them" and "those" and serve only to make sweeping generalizations, almost always negative, about whole groups of people.  Like single parents or teachers.  But among "them" are actual people with actual stories.  Like this person, working two jobs, depending on her mother for child care for an autistic son, working to provide everything for all three of them.

We need to actually try to see real people when we have these debates and not treat them as categories.  It will help if we actually know some of "them."  Even just a little bit (although not like we came to know "Joe the Plumber," who became a media star, at least for fifteen minutes or so, four years ago in service to a political agenda).  To see their lives as they really are and not as we imagine or want them to be.  To look at them with the eyes of compassion (from the Latin: to suffer with) and not through the lenses of our own prejudices.

Is my waitress the emblem of all teachers or single parents or parents of special needs kids? No. She is one example, a woman with whom I had some conversation, mother to mother, and on whose face I could read the tension and worry about her child even as I experienced her competence at her job and confidence in her abilities.  Someone a lot like me, actually, in some ways.

In our national conversations about all of these things (and immigration, too), it is never wrong to start with compassion and go from there.  We are talking about people, not categories, with lives, not lifestyles.  People who are not sitting around at home planning to take over the world with their "agendas" or even take away other people's rights.  Just people, loved by God.

Perpetua said…
I just caught this on my way to bed, Penny, and as very moved by it. There is something wrong when someone like a teacher has to work two jobs to keep her family, but like you I admire her for it. Election times are never good when they descend into stereotyping and division, so I don't envy you the next few months.
March 4, 2012 at 6:54 PM

Penelopepiscopal said…
Thanks, Perpetua. It is wrong. I'm already so weary of politics and I know it's just going to get worse as the year goes on.
March 4, 2012 at 8:26 PM

Raima said…
I loved this essay, Penny, both for its message and for the superb writing. I could see everything you described and felt I was there, with you, as you sat at that table and watched the kids across the street. Keep writing!
March 5, 2012 at 4:36 PM

Penelopepiscopal said…
Thank you, Raima! I'm grateful for your encouragement and appreciation.
March 5, 2012 at 5:15 PM

Hey! I just did a post yesterday and tried my best to write a bit about the Episcopal church, if you would like to read it.

Penelopepiscopal said…
Kay, thanks for your comment. I read your post and liked it. St Simon's is a great place. Also, congrats on getting a new camera! I'm going to have to get a new one soon; mine has truly and finally died. :-(
March 5, 2012 at 8:14 PM