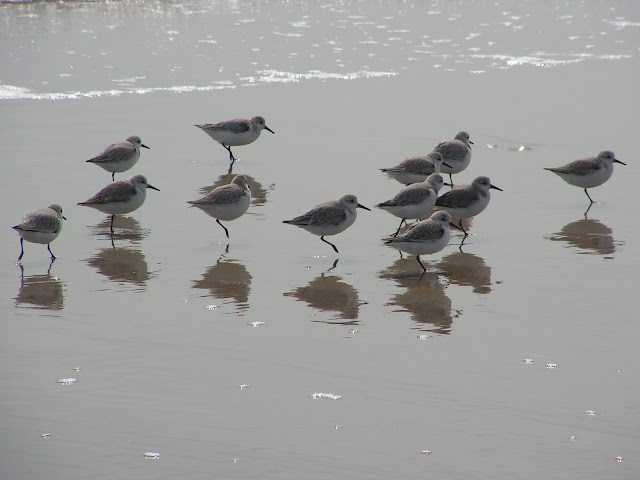 These little birds are sanderlings.  This is probably my favorite breed of shore bird, and that's saying something because I love all kinds of shore birds.

What I love about them is how their little legs go so fast as they run back and forth up and down the beach as the waves come in.  They look like wind-up toys running along, first down to the water and then just as quickly away from the waves. Like little kids, they want to get in, and then when the water approaches, they run away as fast as they can.

I took this photo while on my Lenten retreat at Chincoteague National Wildlife Refuge, along the beach on Assateague Island (which is also part of the Assateague National Seashore and where I also happened to see a couple of turkey vultures as well).  I noticed that many of them were standing on one leg - and as I moved closer to them, they hopped away, still on one leg.  They looked like they were in a scene from South Park (or Veggie Tales if you like), all bobbing along instead of running quickly and smoothly they way they usually do.

It turns out that this standing and hopping-on-one-leg behavior signifies that the birds may be feeling disturbed.  So, while I was laughing as I watched them, I'm sorry to feel that I came across as an intruder.

I've taken many photos of sanderlings over the years, but stills never do them justice.  So here's a short video by Javier Salinas Laguna that shows just how delightful they are:

Perpetua said…
Oh, what a truly delightful video of such cute little birds, Penny. I'd never even heard of them before. Thanks so much.
March 5, 2012 at 2:17 PM

Ray Barnes said…
Dear little things aren't they? So small and sweet. A really lovely video Penny.
Just keep 'em coming! They get better and better.
Thanks for a happy few minutes.
March 5, 2012 at 4:14 PM

Penelopepiscopal said…
Perpetua, I'm glad to have added to your bird repertoire!

Ray, I think the videographer must have had a wonderful time lying in the sand and surf's edge to get such great footage!