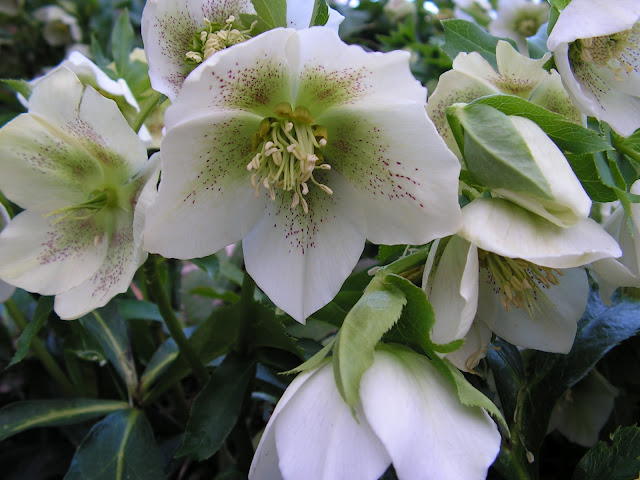 About this time of Lent, toward the end of the first week, I tend to wonder if I'm going to be able to keep my focus.  My discipline has not become habit yet even as I have tried to be more disciplined.  I struggle with whether or not I should be blocking out the quotidian habits as well - reading/listening to the news, doing chores, reading non-self-improving books, being lazy on my day off.  Because they distract me into forgetting about what I want to do during Lent.

This year I find myself facing another issue: a sense of fatigue and vague depression about the world.  I can hardly stand to listen to the radio news.  The focus, yet again, on birth control and anything else that gives people (actually, male people for the most part) an excuse to rant on and on about their basic disapproval of other people's sexual behavior, real or imagined, is almost beyond my comprehension.  There are people dying out there and somebody is worried that some woman somewhere is having some kind of illicit sex and not "paying" for it.  Children are living in poverty and somebody wants to make sure that their mother suffers for having had them in the first place.  Women are being discussed and legislated about as if they "aren't in the room" and certainly aren't capable of making their own decisions about their families and fertility and their own health.  It all makes me kind of crazy mad and yet I want to give up ranting for Lent.

And so I am torn. I don't want to look and hear all this. I am just so tired of it.  But I don't want to put my head in the sand.  And I especially don't want to use Lent as an excuse to focus on a "spirituality" that eschews the real world of God's people all around me.

Lord, have mercy upon us.

Oh Penny, I know the feeling. Most days I can't bear to listen to the news either on radio or TV. Even the so-called balanced news programs insist on giving two sides of the story, even when there are no two sides. An instance is the side that wishes creationism taught in science class. Just because certain folks demand that religious views be taught in science class, doesn't mean that these people have a credible 'side' to which we should give attention, except to say, 'This is not science.'

And the mostly all-male 'debate' about what women should be permitted to do with their own bodies will drive me mad before it's all over.

Ray Barnes said…
I do understand where you're coming from in this Penny.
There really is such a lot of hysterical, self-righteous finger-pointing going on in the media at present. As you so rightly say, mostly by men.
Whatever happened to "let he who is without sin, cast the first stone"?
The thing that works best for me is to stop reading, listening, watching the 'lesser' news, and if it extends to the main news and headlines, stop watching that too.
Trying to make sense of all the current bad stuff is a guaranteed passport to insanity.
March 2, 2012 at 10:59 AM

Penelopepiscopal said…
Mimi, I do find that trying to keep up with the news via the newspaper (online versions now) help me keep from "head in the sand-itis" so that I can choose not to read something and move on to the next story, which I can't do with radio or tv. But it is still like watching a car wreck much of the time. Thanks for the sympathetic support.

Ray, yes, the idea that somehow the sinless are working against the sinful is simply ludicrous, isn't it?

And yet, to sit idly by seems just wrong. Even sitting by with righteous indignation will still lead to the classic definition of depression: anger turned inward.

June Butler said…
I read newspapers at home and online, because I have a choice about what to read. I can't really say that the papers are much of an improvement, with exceptions, of course.
March 2, 2012 at 12:08 PM

Penelopepiscopal said…
Yes, true, Mimi. One wants to be informed but there is still wading through to be done.
March 2, 2012 at 12:16 PM

Perpetua said…
With you all the way here, Penny. Some of what you wrote is more specific to the news in the US, as I haven't hard much about birth control on the UK news for a long time. That said we have plenty of people (sadly too often men) who are only too happy to tell other people how to live their lives, often those in the most difficult of circumstances. Sigh.... That's why I tend to get my new from the BBC website. so that at least I don't have to listen to the voices. :-)
March 2, 2012 at 12:38 PM

Meredith Gould said…
I am with you completely, except the part about feeling vague depression. My fury and disgust has obliterated my depression. Also, I will not watch televised news, and think thrice before clicking through on news articles because there's no news in any of this. My ongoing prayer, "Please, dear God, may my focus remain on you."
March 2, 2012 at 2:31 PM