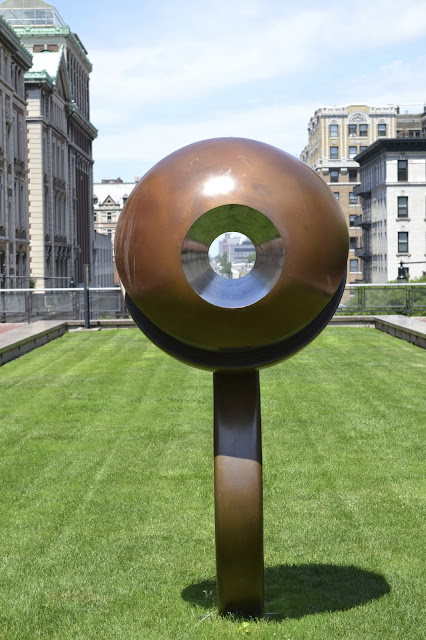 I wasn't able to post yesterday because I am in New York with only occasional internet service.

I'm here checking out Columbia University where my elder son will attend graduate school next year.

The campus is very beautiful - I am excited for him.

(This is an interesting piece of art on campus called Life Force, which was installed in 1992. It's on the Charles H. Revson plaza in front of the law school.)

I also got to see the new Joss Whedon film "Much Ado About Nothing," which currently is only showing in New York and Los Angeles.  I saw it at Lincoln Center. It was a clever adaptation  - the script is still Shakespeare but the setting is modern - and I liked it a lot, although I often heard in my head Emma Thompson or Kenneth Branagh's voices during some of the lines.

Thompson and Branagh still set the standard for Beatrice and Benedick for me. This version's couple is played by Amy Acker and Alexis Denisof, and they are very good but a little more subtly expressive. There are a couple of sly winks towards the Branagh film (such as an empty swing during the scene where Benedick has just overheard Claudio and the others declaration that Beatrice loves him), and Acker and Denisof do well with the physical slapstick in each other overhearing scenes.

There was an additional (unspoken) scene at the beginning that helped make sense of why it is that Beatrice has such strong negative feelings for Benedick.''

At any rate, I am always glad for an excuse to visit The City and look forward to my next visit.