Are We Glad When God is With Others? (A sermon about the woman at the well) 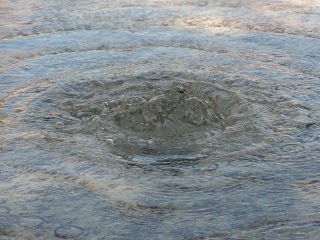 Text:  John 4:5-42
The Israelites traveling in the wilderness were thirsting to death, and they cried out, “Is the Lord among us or not?”
And Jesus said to the woman at the well, I AM.
Seven times in the Gospel of John does Jesus say, I AM.  This is the first time.
I AM is what God told Moses when Moses stood before the burning bush and politely asked for God's name so that Moses could casually drop that awesome moniker before Pharaoh in the course of suggesting that Pharaoh might ought to let the people go.  "Whom should I say has sent me?" Moses asks God.  And God said to Moses, "I AM."
Now we hear Jesus say it as well.  Unfortunately, our translation has supplied an extra pronoun so that it reads "I am he," but in the Greek, Jesus simply says to the woman I AM.  He will go on to say I AM six more times - to the disciples when he walks on the water to their boat; three times to the Judean people who challenge his testimony and try to stone him for blasphemy; to the disciples again, after he has washed their feet; and to the soldiers and Temple authorities who come to arrest him at Gethsemane.
Jesus also uses the I AM metaphorically throughout this Gospel.  I am the bread of life, the light of the world, the vine, the good shepherd, the resurrection, the gate, the way the truth and the life.  In each of those situations, Jesus is showing us who God is and testifying to everyone so that they might come to God through his testimony.
So while in the Gospel of Mark Jesus goes to great length to conceal who he is, in John he uses the divine name for himself all over the place.  And the first time he does so is here, to this Samaritan woman whom he meets in the heat of the day at Jacob's well.
What an extraordinary encounter this is. This woman is a despised Samaritan; an outsider and an outcast, apparently having lost to death and/or been abandoned by several husbands, who comes to the well at noon, when nobody comes to the well; who is well versed in her tradition's stories and history; who actively engages Jesus in a theological discussion; who recognizes Jesus' calling himself by the divine name and rushes off, leaving her water jar behind, to offer urgent testimony to her city; and through that testimony she brings others to Jesus.
Through that testimony she brings others to Jesus, and they see for themselves, and they believe.
In the Gospel of John, this is the point.  The whole Gospel was presented as testimony, given so that people would believe, and through that belief have abundant life.  This unnamed Samaritan woman who was not a 21st century celebrity who controlled her own destiny, able to marry and divorce as she pleased, but was a first century woman entirely dependent upon men who had apparently repeatedly cast her aside - she, not the upstanding Jewish community leader Nicodemus we met last week, shows us what a true disciple of Jesus is supposed to do.

Greg Richardson said…
Jesus also says to her, and to us, "If only you knew . . ." They each participate in the process of revealing their truths to each other; the Father seeks those who worship in spirit and in truth. If only we knew.
March 27, 2011 at 3:19 PM

Penelopepiscopal said…
Yes - this is such a great story, with so much in it to consider. I love how Jesus and the woman engage one another here - it does feel honest.
March 27, 2011 at 3:25 PM

Nancy Wallace said…
Great sermon. I am particularly struck by your thought about acting as if the 'living water' is 'limited' or 'needs to be managed'. There's a lot of challenge behind that idea - food for thought.
March 28, 2011 at 8:14 AM

Penelopepiscopal said…
Thanks, Nancy. I think that we often do try to manage the living water instead of letting Jesus do his thing.
March 28, 2011 at 8:45 AM