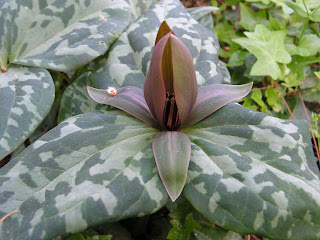 I am reading a book of devotions called Pilgrim Road, a Benedictine Journey Through Lent by Albert Holtz, O.S.B.  The daily essays, as one might imagine from the title, are indeed related to "journeying." In fact, literal travel is the backdrop for the essays; Father Albert travelled far and wide during a sabbatical year and the book begins with the description of a group of pilgrims gathering together for a blessing as they start out to walk some or all of the 800 miles along the pilgrim way of the Santiago de Compostela through France into Spain.

Today's essay takes place on a high speed train, the Eurostar, which runs between Paris and London.  The train's usual speed is 186 miles per hour.  The fields he is passing by look more like pea soup than fields, he notices as he looks out the window.  But then the train has to stop - some trouble ahead on the tracks - and Father Albert observes an old man just a few yards away, spading his small backyard late-autumn garden, turning under the stubble that will decompose over the winter.  That same garden will need tilling and planting in the spring and then more waiting until the seeds sprout, and more waiting as the plants grow, and finally yield a harvest in the summer, which is many months away.  But the man spades now, knowing that June will bring tomatoes and squash and beans.

Father Albert notes the contrast between the train and the garden - a machine built for high speed barreling down the tracks versus fertile ground that depends on regular nourishment and requires a great deal of patience to appreciate.  Get there fast and with great anxiety or move slowly and with great patience; push against boundaries or work within the seasons and the limitations of time, place, and climate.

I recognize the contrast in my own life.

Ah, patience.  Not needing to push to get somewhere fast, to make things happen, to pass quickly by the stuff that is actually life but seems like the blur of pea soup on the periphery of that fast track to accomplishment and goal-reaching activity.  Oh, I have it sometimes.  Sometimes I can really be present to the people around me, to the earth, to the moment.  I can wait, I can look at something (a situation, perhaps) or someone and know that someday there will be a lush growth where there are bare sticks now and not worry about hurrying that process up.

But often, I look back and realize I've passed people by, that there were actually people in that blur, on my way toward some prize or destination ahead.  I've focused narrowly on the future without paying attention to the very real people and very real life that is happening now.  I usually don't mean to.  I just head out, determinedly, and at some point I look back and realize that the person who wanted to chat really needed a few minutes of my time (it may have been one of my family members) that I could easily have given, had I not been determinedly barreling down some track or another.  They were a blur to me as I was headed elsewhere.  I look back and realize that I missed opportunities to feed others' growth and to realize growth in myself because I was in such a hurry to reach some place or some thing.

During Lent, one of the things we focus on is repentance.  Today I repent of the times when I passed people by, didn't see them as neighbors or brother or sisters but only as part of the blur I was moving quickly past, toward some other destination.  We are pilgrims together.  I don't have to get their first.

Dreaming Beneath the Spires said…
Lovely. Your second last paragraph is sad, poignant and convicting!
Anita
March 10, 2011 at 5:32 PM

Ray Barnes said…
This penetrating post sends echoes ricocheting through me. So often we have our sights set on a distant horizon so that we miss the 'here and now'. No-one wants to get stuck in a lay-bye but it is a good idea to get off the motorway from time to time.
As ever Penny, you make me think.
March 11, 2011 at 2:44 AM