Three Words to Live By 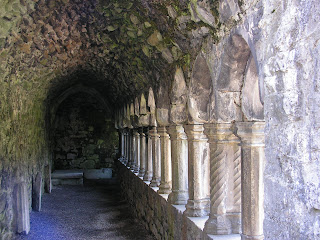 I read in spurts.  Sometimes I'm not reading much at all and other times I get on a roll and blow through several books in a week.  (This doesn't include online reading, which I do every day, and from a wide variety of sources.)  Often I find that I want to read several of the same sort of thing.... this is where series come in handy.  Several Jeeves & Woosters, several Lord Wimseys, several Brother Cadfaels or Sister Fidelmas.

And although I usually have both a non-fiction and a fiction going at the same time, I might see a pattern in the non-fiction department and suspend the fiction for a spell.  Right now I am reading several small books by Becca Stevens, an Episcopal priest who lives in Nashville, Tennessee.  She is both the chaplain of St Augustine's at Vanderbilt and the founder of Magdalene House, a two-year residential program for women who have criminal histories involving prostitution and drug addiction.  The women are able to get off the streets and live together in community for two years without any cost to them.  She also is the founder of Thistle Farms, a for-profit cottage industry which employs some of the women to make natural bath and body products and candles sold under the Thistle Farms name both online and through outlets all over the U.S. (including the Whole Foods stores in my neighborhood).

I was privileged to meet a couple of women from Magdalene House last weekend, to hear their stories (which included the parts about what they got out of their former lifestyle - something that is often missing in our "understanding" about people who live on the streets), to see how they are thriving, how they have made new lives for themselves (and often their children) after having been arrested 80 - 100 times and living in cars or abandoned houses when not in jail.  I bought some of the Thistle Farms products, as well.  Again, what a natural business for these women, to make healing balms for women's bodies.

Rev. Stevens' books are collections of essays, some quite short, some connected to a larger theme; Bible study guides; a book of essays co-written with women from Magdalene.  They are meditation and memoir interwoven; one is about agreeing to and providing a funeral for a stranger.  I am in awe of this priest and all that she has accomplished and all that she does (she is also married and the mother of three boys and has also helped start a school in Ecuador in addition to being the priest to a 300-member congregation and director of Magdalene and Thistle Farms and doing all the public speaking and advocacy she does).  Through her books, one learns quickly that she herself was the victim of sexual abuse, which surely fuels her passion for working with women who share this history.

In addition to wanting to learn more about what makes Rev. Stevens tick and to hear the wisdom she has to impart, I also recognize that her prevailing themes speak to what my own soul longs for:  generosity, love, and sanctuary.  I want to stay in this place for a while, mulling over these words, these ideas, these ways of being - love, generosity, sanctuary - and to imagine how I can be a purveyor and practitioner of these more and more.  The world is such a broken place, even as it is achingly beautiful, and there's so much angst and yelling and accusing and pain-inflicting going on in it.

Just today, the Supreme Court ruled in favor of the Westboro Baptist Church, affirming that they can do things like picket soldiers' funerals and carry God Hates Fags signs around churches and schools and funerals.  (See my post - rant, maybe - about such an event at my children's high school here.)  I know this is about free speech, which I am in favor of.  And so can we, can I, be someone who is open and generous, who offers love, who provides sanctuary in the midst of all that?

We don't really control much of what goes on out there.  But we can be loving and generous, and we can offer sanctuary.  Thank you, Becca Stevens, for playing that theme over and over on your harp.

Dreaming Beneath the Spires said…
Becca Stevens sounds like an amazing woman. Love, generosity, sanctuary--it would be amazing to be able to offer that to our friends and family!--for starters!
March 7, 2011 at 10:05 AM