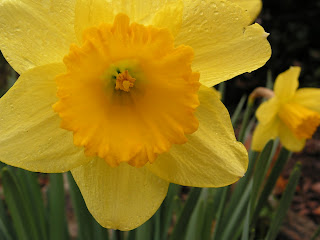 After yesterday's storms, this morning dawned bright and beautiful.  The birds are singing their hearts out, lots of flowers and shrubs and trees are blooming their heads off, and in the midst of all that, people are dying and people are grieving.  I think the birds and the flowers are busy today to abide with us and aid us in our grieving, reminding us of resurrection and new life in the days after death.

Today many friends and colleagues grieve the death of mentors - Bishop Richard Shimpfky, Rev. Dr. Peter Gomes.  Others grieve the deaths of parents, of friends, of children who are not the "famous men" but those who perhaps are already or soon forgotten, by the public at least.

As I have heard the news and read about those who have died in these last days, not only some of the lights of the church (as well as the movie star Jane Russell and Frank Buckles, who was 110 and the "last WWI Doughboy), but also those who died yesterday and are dying today in Libya and in Iraq and Afghanistan and all across war-torn countries and places wracked with disease and those who died in the earthquake in New Zealand a week ago, and those who will die on the streets of various cities today from cold or violence or addiction or hate, I've been remembering the traditional reading for All Saints' Day (i.e., the BCP reading, not the RCL reading) is from Ecclesiasticus, also known as the Wisdom of Solomon.  It goes like this:


Ecclus. 44:1 (NRSV) Let us now sing the praises of famous men,
our ancestors in their generations.
2 The Lord apportioned to them great glory,
his majesty from the beginning.
3 There were those who ruled in their kingdoms,
and made a name for themselves by their valor;
those who gave counsel because they were intelligent;
those who spoke in prophetic oracles;
4 those who led the people by their counsels
and by their knowledge of the people's lore;
they were wise in their words of instruction;
5 those who composed musical tunes,
or put verses in writing;
6 rich men endowed with resources,
living peacefully in their homes-
7 all these were honored in their generations,
and were the pride of their times.
8 Some of them have left behind a name,
so that others declare their praise.
9 But of others there is no memory;
they have perished as though they had never existed;
they have become as though they had never been born,
they and their children after them.
10 But these also were godly men,
whose righteous deeds have not been forgotten;

13 Their offspring will continue forever,
and their glory will never be blotted out.
14 Their bodies are buried in peace,
but their name lives on generation after generation.

Anonymous said…
hello - I came across your blog via Ray's at Daydreamer and was immediately attracted 1. to the title and 2. to the gorgeous photo of a daff.. wonderful. As life goes on for us we do, indeed, uphold in prayer those who mourn and for whom time as stood still. Thank you for your post, Judyx
March 1, 2011 at 3:59 PM