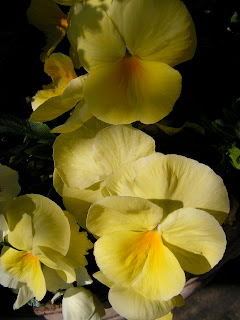 Today is the Feast of the Annunciation, the day in which we commemorate the encounter between a young unmarried Jewish girl named Mary and a heavenly messenger from God, the Archangel Gabriel.   During this short conversation as recorded in the Gospel of Luke (here) the angel announces to Mary that God has chosen her to be the bearer of the savior of the world.  The angel approaches Mary, reassures her, (fear not!) tells her of the plan, patiently answers her questions, and hears her response - yes, I will.  This poignant intersection of humanity and divinity has inspired some of the most beautiful visual art and poetry ever.  I bid you to visit Grandmere Mimi's blog, Wounded Bird, to read the lovely poem by Thomas Merton here; read a good sermon and see four fantastic paintings at Padre Mickey's Dance Party here; enjoy Denise Levertov's poem accompanied by He Qi's evocative painting at Nancy Wallace's blog Seeker here.

Today is also the 100th anniversary of the Triangle Shirtwaist Factory fire in New York City, the horrific industrial disaster that claimed the lives of 146 young girls, most of whom were Italian and European Jewish immigrants.  Among the dead was another Jewish Mary, Mary Goldstein, 18 years old.  Her picture adorns her gravestone in Staten Island (see that here; see the names of all the victims here.)

The fire started at the end of the work day on March 25, 1911; company policy demanded that doors on each floor be locked; elevators only held 15 passengers at a time; 500 people were employed at the factory; the fire department's ladders and hoses only reached the sixth floor of the ten storey building and the factory was located on the eighth through tenth floors.  Even without reading the informative article about the fire and the many expressions of commemoration of it that will be happening in New York today and into the weekend online at WNYC's (New York's public radio) newspage  here, and at The Velveteen Rabbi's blog here, which includes a video trailer from an HBO documentary about the fire, you can put these facts together yourself and imagine how it turned out.  You can imagine that people were unable to get through locked doors and that many of the deaths were the result of young girls jumping out of windows, hoping that someone would catch them.  You can imagine how many horrified people stood by, desperate but unable to help.

The fire prompted new laws and regulations about fire safety and employment of women and children as well as serving as an impetus for garment worker organizing and intensifying discussions about women's rights.  And meanwhile, as was reported in the Jewish Daily Forward (see it here), "[t]he entire neighborhood is sitting shiva.  Every heart is torn in mourning.  The human heart is drowning in tears.  What a catastrophe!  What dark misfortune!"

This is a mystery to me: Of what primordial, celestial stuff, stardust and earthdust, are we made that the human heart is able to bear the presence of death and yet also the divine?

Nancy Wallace said…
Thanks for linking to my blog and for the other links in this post. I like the way you've put the Annunciation to Mary together with the mourning for another Jewish Mary and so many other people in the shirt factory disaster of 100 years ago.
March 26, 2011 at 8:40 AM